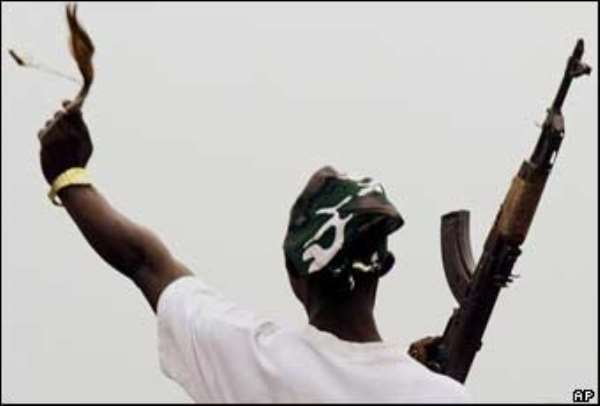 A feud between two friends over a Range Rover vehicle belonging to their mutual female friend has led to a shooting incident leaving one in critical condition while the other is on the run.

The Accra Police Command is looking for Brian Brandson Richards,32,a Jamaican,who allegedly shot Nadeem Zakkour, who is in critical condition at the 37 Military Hospital.Nadeem is the son of Mr Harry Zakkour, owner of the Bus Stop Restaurant,a popular spot on the Ring Road Central.

The shooting incident took place in a house on Spintex Road said to belong to Ms Sally Kabonaba,31,owner of the Montecarlo Forever Boutique at Osu RE in Accra. Brian,who is said to have been in the country for only six weeks,was introduced to Sally by Nadeem, who served as the supervisor of Sally's domestic staff.

At the time of the incident,Brian was living in Sally's house while she was on a visit to Holland. According to the police, Nadeem, who was hit in the left ribs, rapturing one of his kidneys, had undergone surgery and was on admission at the Intensive Care Unit of the 37 Military Hospital.

Mr Bright Oduro, the Accra Regional Crime Officer,said after the incident, Brian,still wielding the pistol used in the shooting, entered the Range Rover which was believed to be at the centre of controversy,drove to the British High Commission, abandoned the vehicle there and bolted.

Giving details of the case,the police officer said at about 8:30 a.m. on Monday, Nadeem went to the house in a taxi and asked of the whereabouts of Brian. A security man in the house told him Brian was “upstairs” and Nadeem went there.

He said not long after that, there were hot exchanges between the two, during which Nadeem came down holding the keys to the Range Rover which was parked in the house.

The crime officer said Brian followed up shortly and demanded that Nadeem returned the keys and when he refused, a struggle ensued. In the process, Nadeem fell.

He said Brian removed a pistol from his pocket and fired a shot at Nadeem while he lay on the ground but missed . He fired two more shots one of which hit Nadeem in the left ribs.

The crime officer said before Brian drove out of the house, Nadeem, still conscious, begged him to take him to hospital but Brian left him to his fate and drove out.

Incidentally, the taxi which had brought him to the house was still waiting at the gate so he was put in it and rushed to the 37 Military Hospital.

Brian told people in the house that he was going to report at the Airport Police Station but instead drove to the British High Commission where he abandoned the vehicle and bolted.

Mr Oduro said two empty shells and one head were recovered from the scene.An eyewitness,George Amewuzeh,who is a househelp,corroborated the story and said that when Nadem fell as a result of the scuffle, he pleaded: “Iam your friend please don't kill me “But Brain ignored the plea and shot him.

He later ordered one of the workers in the house, Jones Oppong,at gunpoint, to accompany him to the Airport Police Station to report, but on the way, he decided to rather go to the British High Commission where he “would be safe”.

The househelp said Brain dropped Jones at the security point at the High Commission and drove into the premises.

Meanwhile the police have appealed to members of the public,especially those who work at the entry points,to be on the look out for Brian, who is believed to be trying to leave the country.A reward will be given to anybody with information that will lead to his arrest.