Banks will collapse if BDCs debts are not paid – Bawumia 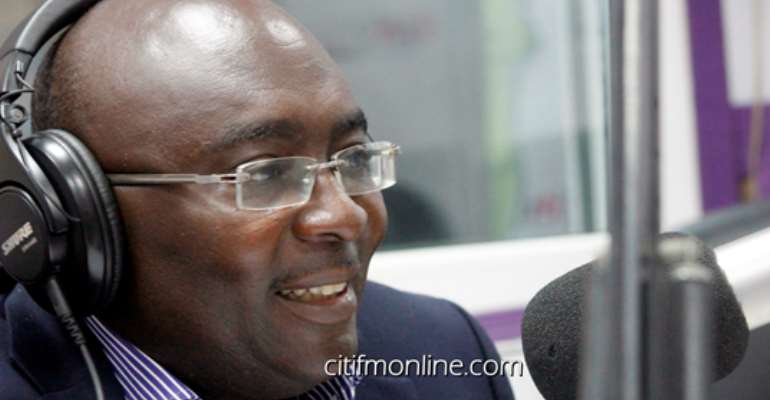 ‘The BDC debt is a real threat to the banking system, this banking system if we do not take care it is going to be in a crisis the banks are exposed to the BDCs some of the banks if the BDCs don’t pay will collapse’. He said.

Government is currently indebted to about 17 Bulk Distribution Companies (BDC)s in excess of 500 million cedis.

Majority of the BDCs contracted loans from commercial banks in the country to facilitate their operations but have failed to pay up the loans due to government’s indebtedness.

The development has been attributed as one of the  cause of the significant rise of bad loans on the books of banks recently.

Earlier the CEO of the Chamber of Bulk Distribution Companies (BDCs) Senyo Hosi told host of the Citi Breakfast Show Bernard Avle that majority of bulk distributors of petroleum products will be forced to halt operations by the end of 2016 if government fails to pay debts owed them.

‘We have liquidity heavily stacked. A number of BDC's are not operational. We are using the private sector to fund government fiscal policy indirectly. That is what we have been doing. The debt at the bank is, well you know about it already. Most of the NPA's are significant and non performing loans are significantly BDC's debt. Some of them have not yet been provisioned for. So you have a broader institution of the entire economy. If the banks are going to go down we will struggle’.

The Bank of Ghana, in its first financial stability report for 2016 revealed that bad loans on the books of commercial banks in the country increased by 14.9 percent to 4.52 billion cedis in 2015 against the 2.72 billion cedis recorded in 2014.

Players in the banking industry have described the development as troubling.

CEO of Fidelity Bank Edward Effah told Citi Business News at the bank’s AGM  that ‘ we have also seen a deterioration of loans from the BDC's, this is because government owes the BDC foreign exchange losses and under recoveries. So the BDC's are unable to pay the loans.  But I believe this is being resolved through the energy sector levy act which has been passed and we hope that by the end of the year, a lot of progress would have been made towards this resolution’.

The development has led to some of the banks threatening to slash and in some cases cut loans to BDCs.

HFC bank in at its AGM early this year told shareholders it may be forced to cut giving out loans to such companies due to their indebtedness to the bank.

HFC was one of many banks who saw their loan impairment expense rise due to the BDCs indebtedness.

Speaking on the Citi Breakfast today [Friday] Alhaji Dr. Mahamudu Bawumia warned a number of banks risk collapse if the BDCs debt is not settled soon.

‘I am very worried and concerned because of the former position i held and this BDC issue is a major threat to the banking system and it should be addressed or a number of banks will collapse because of the debt’. He said.

Government last month promised to clear the debts by the end of June, 2016, which were accumulated over a period of two years.