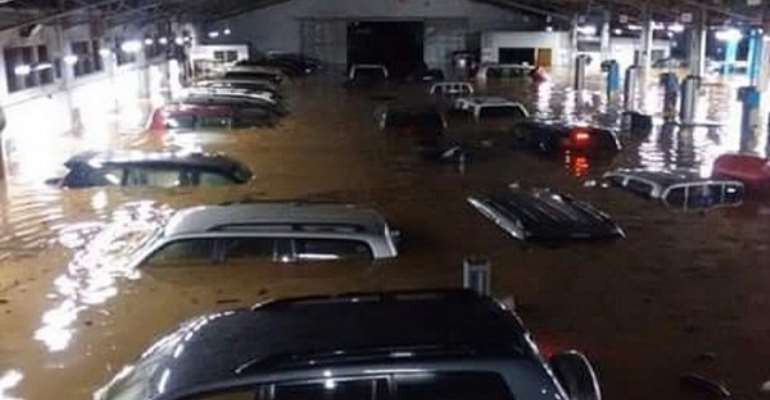 Some clients of the automobile company dragged it to the National Insurance Commission following the company's refusal to compensate them for damages suffered in last year's June 3rd flood and fire disasters.

Enterprise Insurance explained that the insurance policy did not cover the losses.

But the NIC early this year directed that Enterprise Insurance completes payment of all claims by January 25.

Speaking to Citi Business News however, the Head of Legal for the NIC, Emma Ocran confirmed payments by the insurance company,

“For all the claims that were brought before us, as far as the NIC is concerned, Enterprise Insurance has paid all that claims,” she said.

No change in flooding situation at graphic road

Meanwhile a visit by Citi Business News' Norvan Acquah-Hayford to the Graphic Road where most of the automobile companies are located showed that the situation hasn't changed much.

He however reported of an ongoing construction of a new office complex by Rana motors which is expected to house its offices and protect the company from any adverse effect resulting from a possible disaster.

The Odaw river which lies behind the stretch of companies is equally being disilted to allow the free flow of rainwater.

According to them, such businesses pose a greater risk for their operations.

Although concerns have been raised over the huge losses reported by some micro businesses due to market fires, the Managing Director of Nsia Insurance, Mabel Porbley told Citi Business News insurance firms will have to realign their operations to cope with the high risks businesses.

“Sometimes there are really no risk management issues because there is wrongful wiring of electricity connections, cooking and they are wooden spaces, and you cannot tell them not to cook because you want to cover them. So we will just continue to assess them and the risks that we will cover, why not, we will get them covered,” she observed.

Meanwhile owners of some micro and small scale businesses around the Goil filling station area who were affected by the disaster have expressed mixed reactions at signing onto insurance policies.

Some of whom have been speaking to Citi Business News however admitted the importance of signing onto insurance plans.

One trader indicated, “I secured an insurance policy with one insurance company. But when my car got involved in an accident, the company refused to pay up the policy I secured with them so I would rather save with a bank now.”

Yet another remarked, “If I come across any insurance policy, I will get involved because I have seen how important it is now,” one trader noted.