Parliament urges security agencies to beef up against crime 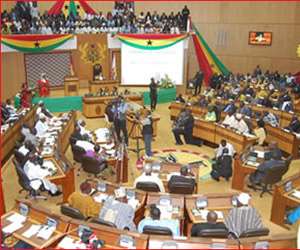 By Ken Sackey, GNA
Accra, May 26, GNA - Parliament has said Ghana must urgently train more qualified people as police personnel to sharpen the country's reaction to the current and emerging national security threats.

The House contended that it had become imperative to re-evaluate the country's internal security situation because the recent surge in violent crime was 'very disturbing' and could destabilise the peace and cohesion of Ghana.

The Members were reacting to a statement made on the floor of Parliament by Mr Isaac Osei, the MP for Subin, which highlighted the need for national response to the personal security of Ghanaians.

They said it was necessary that the security agencies took proactive measures to assure citizens of their safety and security.

The legislators' concerns arise from the gruesome murder of one of their colleagues, J.B.Danquah-Adu, who represented the Abuakua North Constituency, the recent attack on Dan Kwaku Botwe, the MP for Okere, at his residence, the rising spate of political violence and armed robbery, ethnic and religious intolerance and the contentious issue of itinerant herdsmen challenging locals for grazing land.

Mr Osei, whose statement dwelt on the need for security for citizens in general, and lawmakers in particular, noted that although personal safety was primarily a responsibility of the individual, there were national security implications that required a national response.

He said it was important to bring the police-citizens ration to as close as possible to the U.N's ration of one policeman/woman to 500 people within the shortest possible time.

The lawmaker commended the increased Police visibility in the cities and on highways, which they said had bettered some security concerns.

They, however, called on the authorities to ramp their efforts to contain all threats to the peace, safety and properties of citizens.

He also called for the swift application of Ghana's laws in prosecuting offenders, be they highway robbers, break-in assailants or political thugs to restore confidence in the Police Force and the judicial process of the country.

Mr Emmanuel Bandua, the MP for Biakoye, said though every Ghanaian deserved protection, some citizens by the nature of the service they rendered to the country and the society should be given some level of personal protection to enable them to move and work without fear.

He said the safety of citizens should be the utmost consideration of the security agencies, while its lack could be detrimental to national security.

On the issue of the Fulani herdsmen, the lawmaker called for a tracking system to monitor the number of cattle entering the country and their movement to enable the security agencies to forestall avoidable clashes with locals.

He also called for a policy that encouraged the ranching systems in order to avoid the free-ranging that was causing conflicts between communities and cattle herders.

Major Derek Oduro (Rtd), the MP for Nkoranza North, for his part, urged the security agencies to be proactive and reactive, calling for efforts to enhance the operational capacity of security personnel to enable them to carry out their roles as the legitimate guardians of the people.