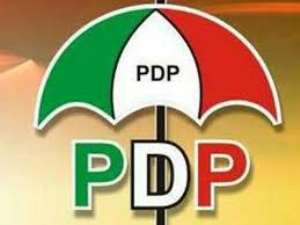 These are definitely not the best of times for the People’s Democratic Party (PDP). The event of Saturday, 21 May 2016 only confirms the predictions that some of us have made about the party in the past. The party obviously is not prepared for its new role as an opposition party. Except one is either ridiculously optimistic or simply mischievous, the crisis some of us have predicted in the past months since the PDP was defeated in March 2015 came to light on Saturday.

I remember wondering if PDP lost it thinking cap to theft when it appointed ex-Borno Governor, Ali Modu Sherriff as acting National Chairman some month ago. I equally remember how some of the party’s supporters “jubilated” at the “strategic decision”. They told us that he is the man to help defeat the All Progressives Congress (APC) in the North East. They suddenly found nothing “linking” him to Boko Haram. Some of these supporters were ready to fight tooth and nail anyone who dares touch the “anointed” Sherriff. His sins are forgiven as far as these ones are concerned until what will later befall ‘our great party’.

Life can be funny sometimes. While the supporters of Manchester United were busy celebrating their victory over Crystal Palace on their FA Cup victory, their manager, Luis van Gaal, knew he was living on borrowed time. One can get sacked for winning, not minding the fact that some managers in the same league have kept their jobs even though they are not turning out the trophies. Sherriff’s offence was that he attempted to elongate his tenure to the displeasure of his bosses or the “owners” of the party. Like van Gaal, Sherriff “won” the only election he supervised for PDP which is the Rivers re-run.

Sherriff himself will not let go easily. He simply called a press conference in a Port Harcourt hotel to announce a postponement of the convention citing a recent court ruling barring the event from holding. The party chief who must have depended on his lieutenants in the National Working Committee (NWC) was later to find out that he was all alone all along.

After making the announcement with him and other NWC members staging a walkout, Uche Secondus, (deputy national chairman of the party) the same man Sherriff took over from some months ago was on ground to “represent” his “boss”. The party at the point nominated former governor of Kaduna, Senator Ahmed Makarfi. What a loyal deputy!

If there were intrigues playing out in the Port Harcourt “faction” of the party, the politicians that gathered under what I like to call the Abuja “faction” did not hide their hatred for Sherriff. In fact, the group which appointed former Deputy Senate President, Senator Ibrahim Mantu, as chairman, applauded the decision of the Port Harcourt faction to “sack” Sherriff as the party chair. For the Abuja faction the main objectives “…have been achieved because we wanted a leadership that is credible, a leadership that will emerge through a constitutional process.” How then has he been working in the midst of his known and unknown enemies?

Perhaps, Sherriff is either overestimating the PDP from what he knew about the party about 16 years ago or underestimated the power of the new forces in the party to rise against him. I say this because, since Sherriff was governor of Borno state under the defunct All Nigerian Peoples Party (ANPP), he probably envied the “largest party in Africa.” He must have admired the fact that the PDP had more national outlook than his party whose influence starts from the North West and ends in the North East at its very best as against the PDP whose umbrella spreads across all the geo-political zones.

He probably did not figure in the fact that things have not remained the same for the party since President Goodluck Jonathan became the President and its leader. The party’s influence in the North as waned significantly afterwards. The party is now controlled by tribal warlords, religious chieftains and “our son” syndrome. It is no longer the national party most people, including Sherriff, know. The governors of the party are many based in the South especially the South-South and South-East geo-political zones.

Technically speaking, the chairman who has no base in these power blocs is like building something on nothing and expecting it to stand. Since Sherriff is not ‘our son’, and he dared to have an ambition that negates those of the party bosses, the gang up against him in Garden City is understandable.

One of those who earlier supported him to be chairman, Ekiti State Governor Ayo Fayose, speaking through his spokesman, Lere Olayinka, said “I supported Senator Ali Modu Sheriff in good conscience. But when it became obvious that his continuous stay in office as the National Chairman will jeopardize the collective interest of the party, I had no option than to support his removal.” Again, with friends like Fayose, one needs to watch his back carefully!

Conflict management, interest articulation and political communications are important functions of every political system. The PDP as a political party needs to be more aware of these functions if it intends to perform in opposition. On this, I say, welcome to the real world!