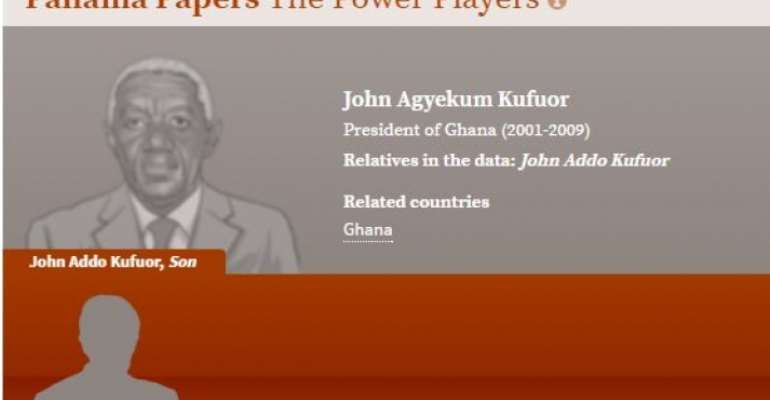 The massive leak of documents, which were all hidden in 11.5 million secret files exposes the offshore holdings of 12 current and former world leaders and provides details of the hidden financial dealings of politicians and public officials around the world.

They were leaked from one of the world's most secretive companies, Panamanian law firm Mossack Fonseca.

It shows how Mossack Fonseca helped clients launder money, dodge sanctions and evade tax and how the rich and powerful use tax havens to hide their wealth.

The leak also exposes confidential documents and the names of 140 politicians including Heads of state, their associates, ministers and elected officials from more than 50 countries who are connected to offshore companies in 21 tax havens.

The report by ICIJ however explains that there are legitimate uses for offshore companies, foundations and trusts and that the intention was not to suggest or imply that any persons, companies or other entities included in the ICIJ report have broken the law or otherwise acted improperly.

It goes further to explain that engaging in offshore business in itself was not illegal.

John Addo Kufuor
According to the report published by the ICIJ , Mr Addo Kufuor's offshore company controlled a $75,000 bank account for him and his mother [Mrs Theresa Kufuor].

Later that year, it controlled a bank account in Panama worth $75,000.

In November 2010, an employee in Mossack Fonseca's compliance office in the British Virgin Islands suggested to colleagues that 'due to the apparent prevalence of corruption surrounding Mr. Kufour we would not recommend us taking him on as a client or continuing business with him.'

Mossack Fonseca, however, continued to do business with Kufuor.

Both were registered when Kufuor's father was president of Ghana and became inactive in 2004 and 2007.

According to the ICIJ, when Mr Addo Kufuor was repeatedly contacted for a comment, he did not respond.

Mr Addo Kufuor is the eldest son of Ghana's former president, John Agyekum Kufuor, who led the country from 2001 to 2009.

As a trained accountant, the younger Kufuor has worked in the hotel industry.

Throughout 2005, there were media reports of allegations that he gained lucrative government contracts and private sector business deals through paternal connections.

An official commission later found no evidence of wrongdoing.

Kojo Annan
In the case of Mr Kojo Annan who is the son of former United Nations Secretary General, Mr Kofi Annan, who served from 1997 to 2006, he used an offshore company to buy a $500,000 London apartment, according to Mossack Fonseca data.

The files states that the Swiss company, Cotecna hired Kojo Annan in 1995 for work in Nigeria. By early 1998, he had quit to become a consultant to Cotecna. Months later, the United Nations awarded the firm a contract as part of Oil-for-Food humanitarian program in Iraq, prompting allegations of impropriety.

An independent panel investigated the program, including Mr Annan, and issued a report in 2005 that found no evidence that he tried to influence or to use family connections to benefit from the program.

Annan and Cotecna have consistently denied allegations of wrongdoing.

The files added that Annan was sole director of the Samoan company Sapphire Holding Ltd, originally incorporated in Niue in 2003, which he had used to buy an apartment in central London.

The apartment was purchased in a transaction completed in 2003 for more than $500,000, according to U.K. records.

Mossack Fonseca continued to communicate with Annan at the central London address, Argyll Mansions, into 2015. Annan was also a joint shareholder and director of two British Virgin Islands companies incorporated in 2002.

However, a lawyer for Annan responded that his companies "operate in accordance with the laws and regulations of the relevant jurisdictions and, insofar tax liabilities arise, they pay taxes in the jurisdictions in which taxes are due to be paid.

'In other words, any entity and account held by Mr. Annan has been opened solely for normal, legal purposes of managing family and business matters and has been fully disclosed in accordance with applicable laws."

He also noted that an investigation found no evidence that Mr Annan tried to influence anyone in the UN to award contracts to any company with which he was associated.