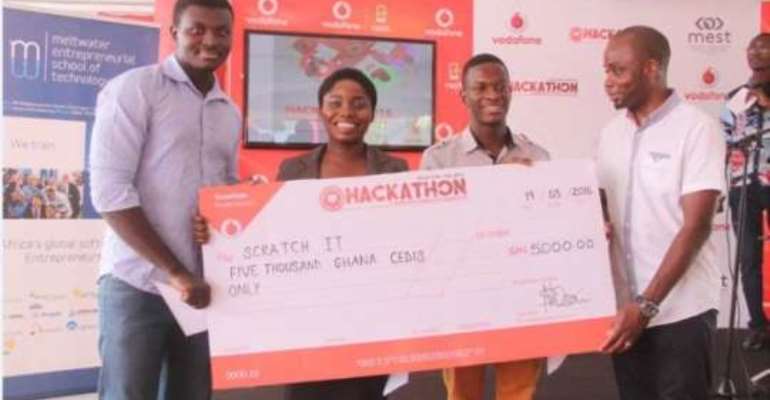 The competition which was held during the weekend saw different applications developed by the each of the groups to solve problems associated with Health, Education, Entertainment, Agriculture or Finance.

The overall best application award was given to the 'Scratch it' team after developing an application aimed at making it easier and more convenient for tertiary institution applicants to purchase cards or forms to apply for admission easily without going through stress.

The 'Medi Pay' app team with an application meant to individuals to easily purchase drugs from local pharmacies won the second position.

The 'U-tick' app team designed an application of a mobile ticketing system using Vodafone Cash, which allows event organisers and event promoters to register their events online for users of the app to purchase tickets.

The overall best team received many benefits including a cash prize of GH¢ 5000.00, six months free access to Vodafone CafÃ©, a platform on the Mobile App store, a GH¢ 200.00 Melcom voucher for each member, and Vodafone cash benefits.

The second winner received GH¢ 3000.00 and the third GH¢ 1000.00 as well as other similar benefits received by the ultimate prize winners.

Mr Julius Owusu Kyerematen, Director of Strategy and Innovations, Vodafone Ghana speaking on the theme: 'Empowering a cash light society' said, having a talent is not the problem, but supporting one to achieve a talent.

He said Vodafone would therefore give the winners the platform to get into the market and hopefully get their ideas to the public within the few months.

Mr Owusu Kyeremateng said the project gave participants two days to develop an idea and describe how best it could be implemented for the Judges to select the winners.

'From there we will work with these winners to refine their ideas and experience and help implement them for the wider public,' he said.

Speaking about the ideas developed by the Presbyterian Senior High School as the only Secondary education level students in the competition, Mr Owusu Kyeremateng disclosed that more senior high School students may be given the platform to participate in the following year's contest by making them the focus to enable them showcase what they could offer.

Ms Blessing Onomesino, a member of the 'Scratch it' team said 'I never expected to win even though I knew scratch it was a very good idea, and would therefore work hard with Vodafone to make this a reality.'

Ms Onomesino said the idea was brought up because of the stress people go through to apply for admission into tertiary institutions due to numerous reasons including how distant one is from the institution.

Mr Nathan Amanquah, a member of the judges from the Ashesi University College speaking to the GNA in interview said the criteria for selection of the winners included how viable their initiative would be; how much revenue it could carry; and the impact it could have on users.

He said the winners were given the position because they thought the initiative would help many people to purchase forms at the convenience of their homes to apply for a tertiary institution without going through too much stress and discouragement.