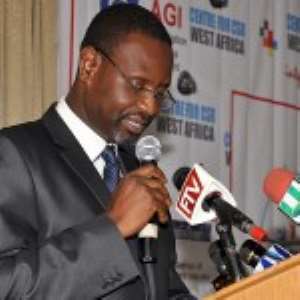 Almost all applications for funding from members of the Association of Ghana Industries (AGI) to the Export Development and Agricultural Investment Fund (EDAIF) were last year rejected which stopped them from raising funds to carry out their operations.

James Asare Adjei, president of the Association of Ghana Industries, who disclosed this Tuesday in Accra during an SMEs Stakeholder Conference organised by the Ministry of Private Sector Development and Private Public Partnership and the Trade Ministry, said “Apart from the fact that the funds are unavailable, we also have only short term support.”

The AGI needs only GH¢20 million to improve the lot of its members.

Short term credit
Research carried out by AGI indicates that about 80 to 85 percent of all credit to businesses in general was within three to 12 months duration.

“So medium to long term credit virtually do not exist. So if you want to retool, expand or bring on board technology, then definitely you wouldn't be able to take credit 12 months to import equipment, which in itself will take six months to get here. Now you need about three months to test-run before you start production by which time the loan would be due for repayment while you have not actually started production with the funds you took.”

According to him, SMEs were borrowing at 35 percent while some multinationals were accessing credit at between 19 percent and 20 percent.

“There are a number of credit facilities which exist which are cheaper in our economy. You see, we don't lack the availability of cheaper sources of credit. There is EDAIF, MASLOC, Italian Fund, YES, YEA, and etc… These are all sources of credit that I know were set up with the SME in mind. But the challenge has been their operations. If the banks have their money to sell at 35 percent, why will they come and take yours and sell it at 12.5 percent? So the challenge there would be so many bottlenecks put in the application processes such that cheap funding would be difficult to access,” Mr Adjei said.

EDAIF exhausts funds
BUSINESS GUIDE learnt that SMEs were unwilling to access such funds because of the demand for collateral.

.
Last year, Ghana recorded a trade deficit of $4 billion because SMEs lacked the funds to produce and export.

Also, he said his outfit had invested close to about GH¢15 million but “we are not getting any returns on that. I have had discussions with His Excellency the President on the need to have the Venture Capital recapitalized.

“Our full job is to support SMEs and if we don't have the support, we cannot do much.”