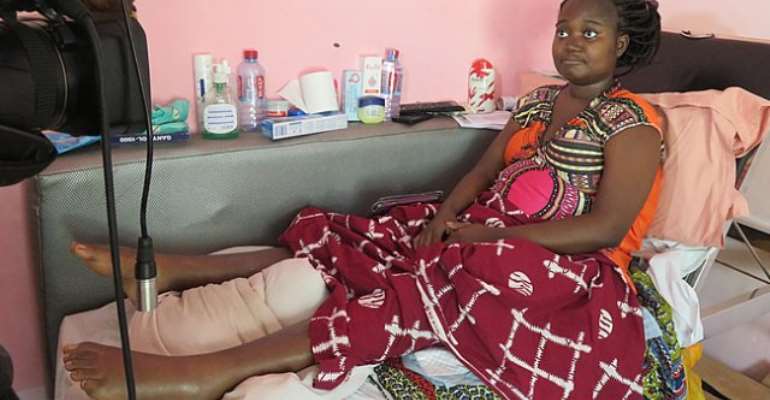 The husband of the 29 year old woman shot and left paralysed in her home has been rearrested by the Tema Police.

Mr Danquah is a prime suspect for the gruesome attempt to murder his 29-year-old wife, Benita Danquah who was seven months old pregnant at the time.

Mrs Danquah was shot at the break of dawn five months ago, in the chest, in what was suspected to be an attempt to murder her.

She did not die but the attack left her paralysed and incapable to pass urine or fecal matter the natural way.

She had to give birth prematurely to save her life and that of the baby. Investigations suggested there was no break into her house the night of the attack and the only person she spent the night with was her husband.

Joy News' investigative journalist Manasseh Azure Awuni who broke the story said the husband was arrested in the heat of the incident, cautioned and granted bail.

The victim, Benita Danquah suspects it was her husband who attempted to kill her but five months on, nobody has been charged for the incident, Manasseh indicated.

On Monday ASP Juliana Obeng told Joy News the prime suspect has been rearrested. She said the arrested followed new information gathered by the police on the matter.

She said the suspect will be taken to court tomorrow to get the court to put him on remand.