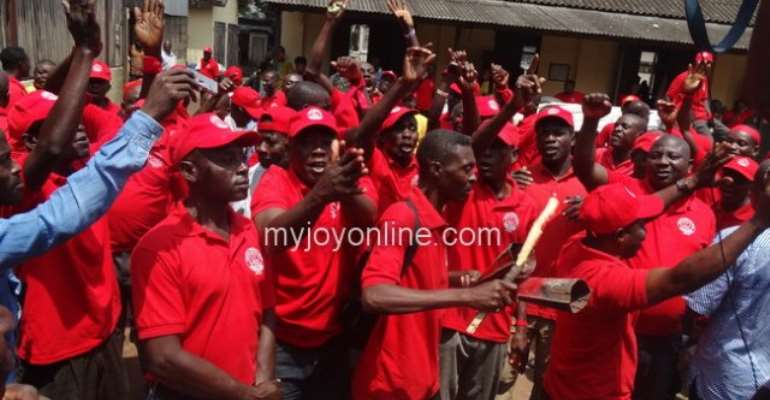 Organized Labour has backed down on some of its demands regarding recent hikes in utility and petroleum taxes following a marathon negotiation with government Thursday.

Labour had demanded a 50% reduction in utility tariffs and the scrapping of special levies on petroleum products.

Government on the other hand had said the levies and taxes were inevitable, insisting it would not review them.

Government had slapped consumers of water and electricity with 69.2% and 59.2% tariff increases respectively in December last year.

Shortly after that, a 28% levy was put on petroleum products – but analysts say there are hidden charges that make the levy greater than the stated figure.

Subsequently 1,000 of public sector workers across the country hit the streets on Wednesday in a bid to pressure government to grant their demands.

However, after Thursday evening’s meeting with government leaders of the various workers’ union say they are happy with outcome of negotiations.

Labour says government has promised to review the price hikes.

Details of the agreement are yet to be made public, but General Secretary of the Industrial and Commercial-Workers’ Union (ICU), Solomon Koeti, told Journalists there have been “monumental progress” in the negotiation process.

“There has been a fundamental shift of both positions and we have made such a tremendous and monumental progress,” Mr Kotei told Joy News.

He said government negotiators provided “detailed explanations supported with figures as to what is happening to the economy right now.”

Solomon Kotei explained that the figures presented by government on the power situation convinced his team that the adjustments government has promised to make were worth considering.

“That pushed Labour to also take a second look at our stance,” he said.

A final deal is expected to be signed next week.
Employment and Labour Relations Minister, Haruna Iddrisu, says government will commit to agreements it has made with Organised Labour.

Haruna Iddrisu says its commitment with Labour was “consistent with NDC’s social democratic philosophy, to provide some further reliefs to the vulnerable under the lifeline band protection in respect of water and electricity.”