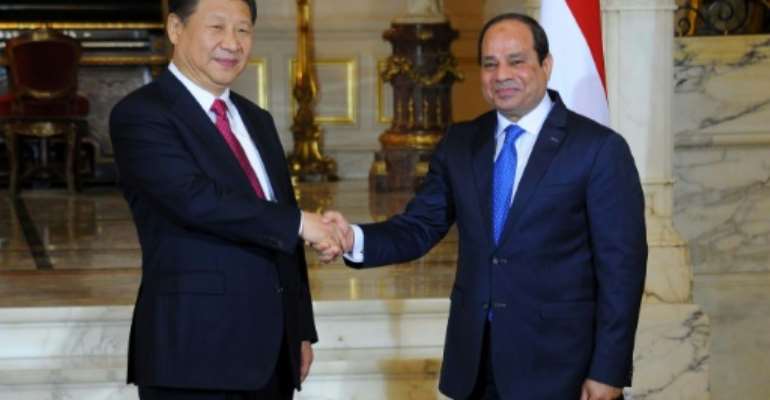 State television broadcast live the signing of 21 bilateral agreements at a presidential palace in Cairo in the presence of the two leaders.

Earlier Thursday state-run newspaper Al-Ahram reported that the deals were worth $14 billion in the electricity, transportation, agriculture, civil aviation and housing sectors.

In an article in Al-Ahram ahead of his visit, Xi expressed China's backing for Egypt running its affairs without outside interference.

"China supports the people of Egypt in making independent choices for the future of their own country," he wrote.

Xi's regional tour, his first to the Middle East as president, will take him next to Iran.

Beijing has long taken a backseat to other diplomatic players in the Middle East but analysts say the region is crucial to Xi's signature foreign policy initiative -- known as "One Belt One Road" -- touted as a revival of ancient Silk Road trade routes.

Xi's visit to Egypt comes just ahead of the January 25 anniversary of the 2011 revolution that toppled longtime Egyptian autocrat Hosni Mubarak.

As well as addressing the Arab League, Xi was to visit Egypt's newly convened parliament, which was sworn in earlier this month after elections dominated by pro-government candidates.

In Saudi Arabia, Xi met with King Salman and oversaw the opening of a joint-venture oil refinery in the Yanbu Industrial City on the Red Sea.

Few details have emerged of Xi's talks with leaders in Riyadh but he had been expected to seek to ease tensions between Saudi Arabia, the region's main Sunni power, and Shiite rival Iran.

Saudi Arabia and a number of its Sunni Arab allies broke diplomatic ties with Tehran earlier this month after protesters angry over Riyadh's execution of a prominent Shiite cleric ransacked Saudi diplomatic missions in Iran.

Iran and Saudi Arabia back opposing sides in a range of Middle East conflicts, including in Syria and Yemen, and there are fears the row could derail diplomatic efforts to resolve them.

Xi was expected Friday in Iran, just days after sanctions were lifted when Tehran implemented its historic nuclear deal with world powers.

China, with the United States, Britain, France, Germany and Russia, was among the countries that reached the agreement with Iran in July to curtail its nuclear activities in exchange for ending international sanctions.