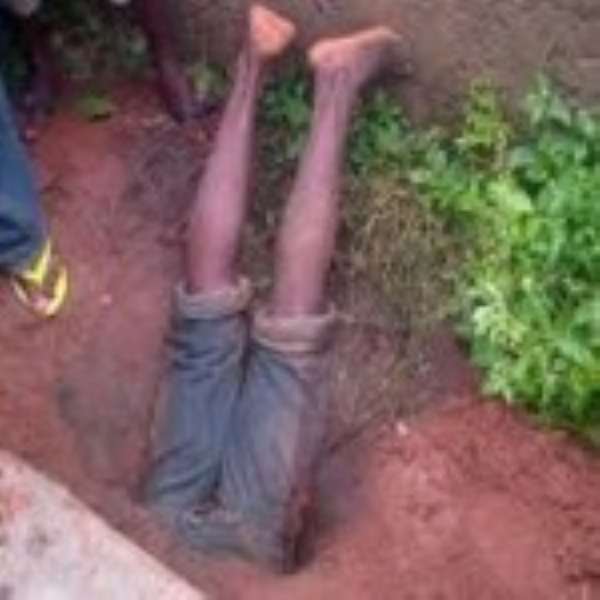 The dismembered body of a 47-year-old trader from Kumasi has been found in a bush at Walewale in the Northern Region.

According to ASP Ebenezer Tetteh, the Northern Regional Public Relations Officer, Agnes Agyei, had travelled to Walewale to collect goods she had ordered from Mahamadu Issahaku, 27 and Alhassan Mohammed, 50 — her agents.

“Upon realizing that the woman had a huge sum of money on her, the agents lured her into the bush, killed her and cut her body into pieces and left the body in the bush.”

The suspects reported the incident to their father, Issifu who advised them not to tell anyone.

Relatives of the deceased became alarmed when she failed to return home two weeks after she left. They traced her to Walewale.

When the two suspects who had been seen with the deceased before her disappearance were interrogated by the police, they said the woman had fallen ill and was receiving treatment at some certain village.

Upon further interrogation, however, the suspects confessed that they had killed the woman cut her body into pieces and dumped them in the bush.

They led the police to the location of the decomposed body and it was retrieved, ASP Tetteh said.

Meanwhile, the police have arrested seven people and retrieved two AK 47 rifles at a village near Salaga in the Northern Region.

Out of the seven, two are prime suspects. Mahama Salifu Mustao and Issah Suale were spotted at Dzanton Daboase carrying a sack containing the rifles.

ASP Ebenezer Tetteh said suspicious residents tried to question them but they refused to speak.

He said they were then arrested and taken to the chief's palace where the sacks were searched and the weapons retrieved.

“During the course of interrogation by the chief and the assemblyman of the area, one Iddrisu Ibrahim Wumpuni, who is 60-years-old and a resident of Lamashegu in Tamale came to the palace to plead for the two to be released but he was also arrested,” ASP Tetteh said.

He said the police are investigating the issue and the suspects will be sent to court and remanded on Tuesday.