CEO Of Glomef Conferred With The Professional Fellowship Award 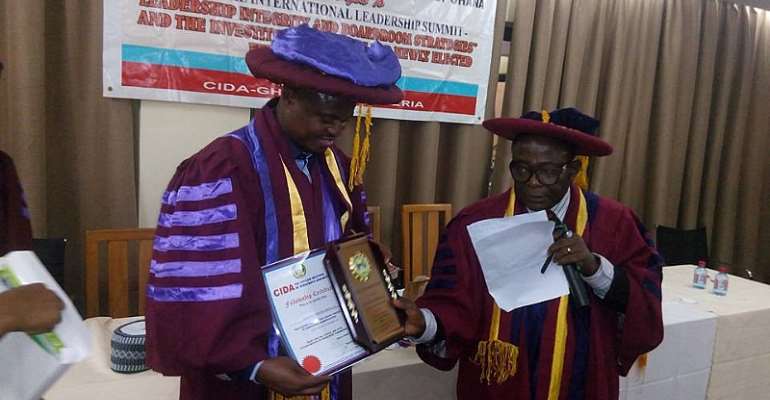 Mr Ahenu was among nineteen other Ghanaian and Nigerian personalities, who in recognition of their immense contribution to the development of the society, the Governing Council of The Civilian Institute of Democratic Administration (CIDA), conferred on them the Award of Professional Fellow (FCIDA) with the right to use the designatory letters- FCIDA after their names.

The award was instituted by CIDA to recognize individuals for their immense contributions towards the development of the society, especially in their chosen careers. The Civilian Institute of Democratic Administration (CIDA) is an international organization based in Nigeria with office in Ghana.

Speaking at the investiture ceremony, Dr Charles Marcus, the Director General of CIDA, said the problem of Africa was cause by the western world, adding that a time has come for Africa to redeem its image.

Mr. Ahenu Junior is a Human Rights and Anti-Corruption crusader and staunch hardworking journalist. He became a household name in most rural communities in the Brong Ahafo region for selflessly assisting them to get their voice head as well as upgrade their living standards.

Mr. Ahenu Junior who had worked with Ghana Broadcasting Cooperation was always passionate about the plight of the vulnerable hence the formation of Global Media Foundation, a Non-profit Organization demanding transparency and accountability in local governance.

Currently, Mr. Ahenu Junior and his organization are advocating for the total legalization of abortion to enable young women access safe abortion service that would invariably reduce maternal mortality in Ghana.

The Professional Fellowship Award by the Civilian Institute of Democratic Administration (CIDA) became the fourth international award conferred on Mr. Raphael Godlove Ahenu Junior, the CEO of GLOMEF from 2009 to 2015.