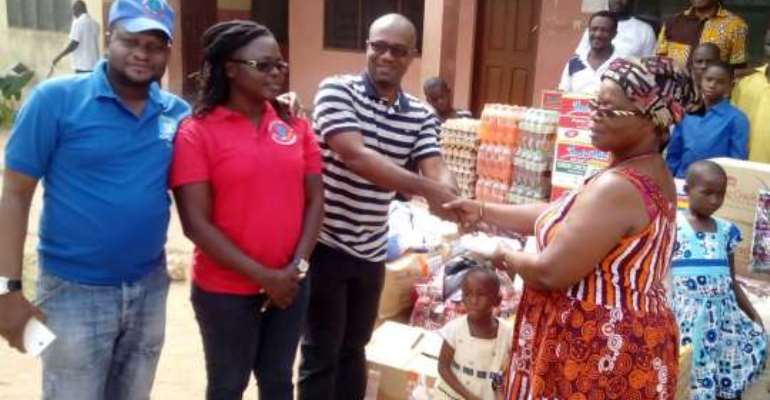 Yawhima (B/A), Dec. 14, GNA - The Brong-Ahafo ESBECAN Association on Saturday presented assorted food items and used clothes valued over GH¢4,000.00 and a cash of GH¢2,000.00 to the inmates of Compassion is Love in Action (CILIA) Orphanage at Yawhima in the Sunyani Municipality.

Besides, as 'a-day-out' with the inmates and few workers of the Orphanage, the males among the members played football with the Orphanage's football team (consisting of teenagers) after they had shared meals and drinks with them as part of the Association's social responsibility towards the needy in society.

The items were 10 boxes of Indomie instant nodules, 120 pieces of exercise books, a box each of Bic pen, pencils, erasers and markers, two rechargeable lamps, 10 crates of egg, a maxi bag each of gari and beans, eight boxes of used clothes and two bags (50 kilogrammes each) of rice.

The rest were two boxes of biscuit, 10 packs of planet soft drinks of 12 bottles each, as well as two Ludos, two Oware and five footballs to promote both indoor and outdoor games of inmates at the home.

Dr. Michael Opoku Agyemang, Senior Research Scientist at the Cocoa Research Institute of Ghana (CRIG), who led the group, explained that members of the association are Cuban-trained Ghanaian graduates resident in Brong-Ahafo Region and its environs.

Dr. Agyemang stated the gesture was their maiden one to an orphanage, and the rationale was to give back to society for having benefited from the society in diverse ways to become professionals.

Mr. Simon Adom-Boafo Junior, the Brong-Ahafo Chapter Organiser, said members of the Association, both active and inactive, numbered over 3000 nationwide and added that they donated to the home as part of the Association's 30th anniversary which was celebrated in 2013.

He gave the assurance that they would continue to assist the needy and orphans to make life enjoyable for them.

Reverend Mrs. Charlotte Osei Kwateng, Founder of the Orphanage, expressed appreciation to the Association and promised that the items and the money would be used judiciously for the better upkeep of the inmates.

Rev. Mrs. Kwateng appealed for a mini bus for the Orphanage to take the inmates to places of educational and social interest as part of their formation and training.