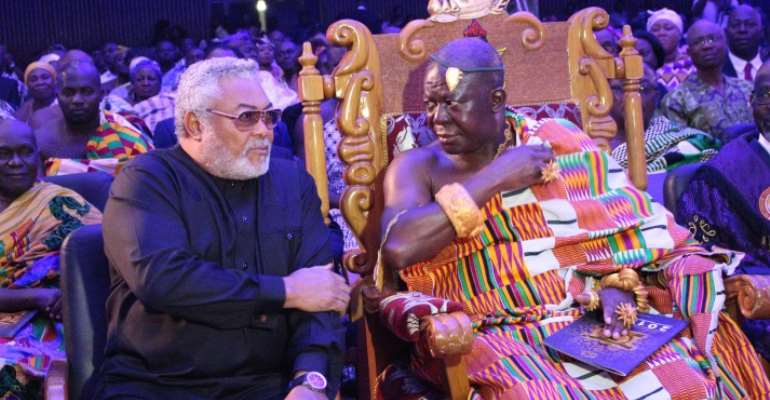 Ghana’s former President, Flt Lt Jerry John Rawlings has called for a paradigm shift in Ghanaians’ approach to patriotism, saying most Ghanaians concede there is a scarcity of patriotism in the country, with selfishness and the desire for money and power taking precedence over love for country.

He said the greed, thievery, fraud and lies we see around us are not peculiar to government or state institutions but constitute a societal malaise that needs to be confronted by all Ghanaians.

The decadence level in the country, President Rawlings cautioned, was high. He therefore called on Ghanaians to focus on doing what was right for society, community and country.

“Today we seek money so we can have power and then proceed to lord it over the vulnerable in society. Selfishness is now seen as a proud asset and patriotism seen as the pursuit of people without ambition,” he said.

The former President made the comments when he addressed a ceremony to mark the 20th anniversary of the Millennium Excellence Foundation at the Great Hall, Kumasi last Friday.

The five-yearly award scheme recognises and celebrates the contributions of distinguished personalities in various fields of endeavour.

Flt Lt Rawlings pointed out that Ghanaians are quick to join the chorus when there is talk of corruption and accountability but wondered how many Ghanaians have not played a part in the deterioration of the basic moral fabric of society.

He also lamented the involvement of some traditional authorities in the abuse of land sale, which has affected investor confidence in procurement of land for productive purposes.

The former President also spoke extensively on global issues describing the scourge of terrorism as a direct descendant of the discord and lack of equitable distribution of resources Ghanaians and others on the African continent take for granted. Selective justice and double standards in global affairs, he stated, have also seriously dented the exercise of morality in international relations.

“The new wave of global violence referred to as terrorism shows how man’s insensitivity to man can lead to violent upheaval almost impossible to contain and control. Even as the world empathizes and sympathizes with innocent victims of terrorist action all over the world, the world also supports the fight against terrorism.

“When the values of civilization are corrupted, democratic culture is in decline and political power and justice are up for sale, why will we not expect an increase in terrorist activities? ” Flt Lt Rawlings said.

The former President said the West and its allies would always be perceived as guilty if the unconscionable injustice perpetrated on Palestinians continues.

Rawlings charged Ghanaians not to ignore global developments or the local degradation of values. He said the daily reports of murders, violent thievery, domestic violence and the upsurge in aggressive posturing by pressure groups was a direct result of the perception by some that just a few want to monopolise the right to power and money.