Jesus Christ Shows Up In Dansoman 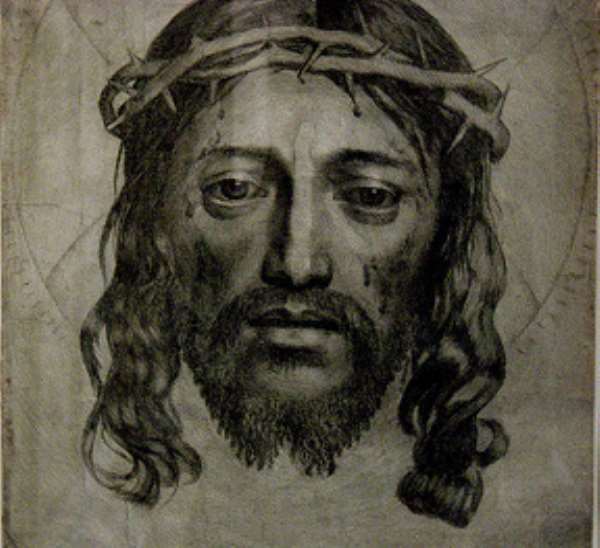 Hundreds of people yesterday invaded the Margaret Mary Catholic Church, at Dansoman in Accra to catch a glimpse of the image of Jesus Christ, which was said to have suddenly appeared on the rocks at the church's Grotto (the sacred place of worship) since Saturday.

The small black spot, which looked more like the portrait of Jesus Christ wearing the crown made of thorns during his crucifixion, was said to have appeared on the wall when some women were preparing the place for worship after members had recited the Rosary. The month of October is observed by Catholics as the month of the Rosary and the congregation of about five parishes in Accra were reported to be preparing to gather at the Grotto to recite the Rosary when the image suddenly appeared.

Due to the large crowd that arrived in turns in taxis, trotros and private vehicles to catch a glimpse of the image, the church authorities had to call in the police to ensure order.They allowed the people to enter the Grotto in turns of 12 to either have a closer view of the image or pray for forgiveness.

Some, after saying their prayers in tears and reciting the Rosary, yearned to touch the image but the police would not allow them.Others dropped various sums of money in front of the statue of Mother Mary, which is mounted at the entrance of the Grotto.There were many others who, gripped with fear, stood afar to watch people pass to the Grotto to satisfy their curiosity.

Barely five years ago, thousands of people, mostly Catholic faithful, thronged the Ghana/Togo border to catch a similar glimpse of another image in the sky which they claimed to be the face of Mother Mary carrying Baby Jesus on her laps.

The Graphic team, on its way to the church, saw hundreds of people either walking briskly or in vehicles moving in droves to witness what they had heard on air. The Parish Priest, Father John Straathof, said “I do want to be very careful about what I have seen on the rocks. I do not want to say it is a miracle but let us allow people to interpret it as they see it.

“If they have faith in it and they want to pray for anything, let them do so.”Mrs Olivia Armah, a member of the church, told the Graphic, “I was with the congregation which came on Saturday to pray at the Grotto after we had gone round to recite the Rosary”.

Asked what she saw on the rock, she replied, “I see the image of Jesus Christ, our Saviour, and I believe it.” “I have prayed and I trust to have some results,” she added.

Master Isaac Nartey, a Class Five Pupil of Ave Maria School, who had also rushed to the place because he heard about it in class, said, “I have seen that black image but I do not believe it is the face of Jesus.”As the paper went to press, people continued to express divergent views on the matter.