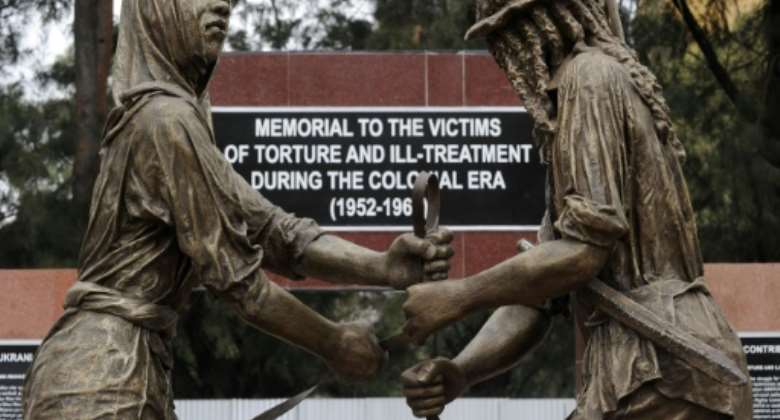 A memorial in honour of victims of torture during the colonial era is seen in Nairobi, ahead of its official unveiling ceremony. By Tony Karumba AFP

Nairobi (AFP) - It was one of the British Empire's bloodiest insurgencies, but the thousands killed, tortured and jailed in Kenya's Mau Mau rebellion were forgotten for decades.

Now, in a rare example of former rulers commemorating a colonial uprising, a British-funded memorial to all the victims is set to open on Saturday.

"This memorial is a symbol of reconciliation between the British government, the Mau Mau, and all those who suffered," reads the stone plaque on the memorial in the capital Nairobi.

Mau Mau guerrillas, mainly drawn from the Kikuyu people, terrorised colonial communities with attacks from bases in remote forests, challenging white settlers for valuable land. But while attention at the time focused on 32 murdered white settlers, the number of Kenyans killed was far higher.

The memorial in the central Uhuru, or "Freedom", Park, is hidden behind tin sheets until its unveiling. It features a statue of a fighter -- complete with trademark dreadlocks and homemade rifle -- being handed food by a woman supporter.

Although it is a joint project between Britain, the Mau Mau Veterans Association and the Kenya Human Rights Commission, the £90,000 (138,00 dollar, 124,00 euro) bill was paid by London.

"The British Government understands the pain and grievance felt... (and) recognises that Kenyans were subjected to torture and other forms of ill-treatment at the hands of the colonial administration," the memorial inscription reads, repeating a 2013 quote from then British foreign secretary William Hague.

"The British government sincerely regrets that these abuses took place. Torture and ill-treatment are abhorrent violations of human dignity which we unreservedly condemn."

The monument has been welcomed by Mau Mau veterans.

"Mau Mau veterans believe that nations, tribes, and human beings are interdependent and that each one of them is a condition of the others' existence," the memorial inscription reads, quoting veterans spokesman Gitu wa Kahengeri, adding they "sincerely believe in reconciliation for a better future."

The commemorative statue follows a June 2013 decision by Britain to compensate more than 5,200 elderly Kenyans tortured and abused during the insurgency.

The £19.9 million deal -- separate from the cost of the memorial -- followed a four-year legal battle.

Professor David Anderson, author of one of the first books to fully document the extreme abuses, "Histories of the Hanged", said the memorial was "long overdue", over half a century since fighting stopped.

"It is the first memorial of this kind to come out of this kind of adversarial process," Anderson told AFP, referring to the court battle.

Few other former colonial powers have supported such initiatives, although in Namibia, former ruler Germany has backed a memorial to the 1904-1908 massacres of 65,000 Herero and 10,000 Nama peoples.

Nairobi already has a memorial to the Mau Mau -- a statue in central Nairobi of key leader Dedan Kimathi, who was hung in 1957.

The bronze statue depicts Kimathi, who held the rank of "Field Marshal", with his trademark dreadlocks and holding a homemade rifle in his right hand and a dagger in his left.

But the new monument is designed to commemorate all those who suffered.

Some of the worst atrocities were carried out by Kenyans against Kenyans, between those loyal to colonial forces and the Mau Mau.

While the Mau Mau are now often seen as a key stage in Kenya's path to independence, they also created bitter divisions within communities.

Kenya's founding president Jomo Kenyatta -- whose son Uhuru is president today -- opposed the violence carried out by Mau Mau, and the group remained outlawed until 2003. Although Kenyatta was jailed before independence for being a member of the Mau Mau, historians have since questioned his alleged leadership of the movement.

For Kenya, with a history of violence that includes post-election chaos in 2007-2008, the memorial could help wider reconciliation efforts, said Anderson, but only if all victims are remembered.

"It should remember all those who died, regardless of what side they were on," Anderson said.