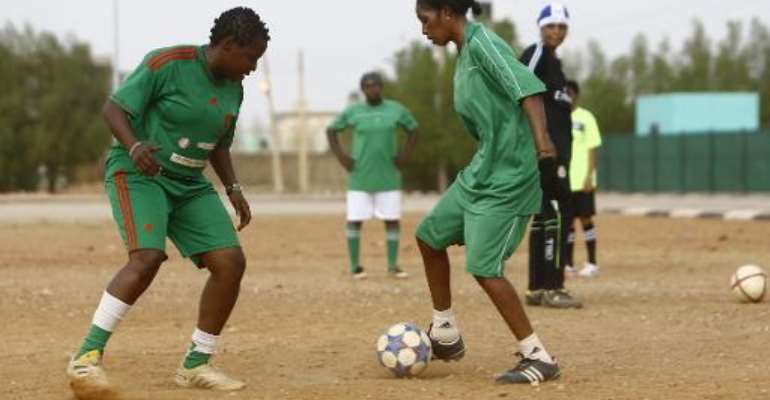 Sara Edward (L), the coach of Sudanese female football team "The Challenge" takes part in a training session at a picth near Khartoum's aiport. By Ashraf Shazly (AFP)

Khartoum (AFP) - On a dirt pitch next to Khartoum airport, Sara Edward watches the players she hopes to mould into Sudan's first national women's football team hone their skills, kicking up clouds of dust.

Her 15 players have taken the name "The Challenge" because of the obstacles they face -- no equipment, no funding and the suspicions of Sudan's Islamist authorities.

"We hope this team will become an international team," Edward said as she watched the women practising while jet planes screamed overhead.

"We're no worse than anyone else. We just lack opportunities," the 29-year-old said.

Darting about the pitch in her worn green jersey and shorts, giving instructions and encouragement, the diminutive Edward is the motor behind the team.

Born in Juba, she became a citizen of South Sudan when it broke away in 2011 and cannot play for The Challenge if they do win national status.

But she has still pressed on with the team, which she joined in 2001 when it was formed in Khartoum's Comboni College.

All but two of the players train in shorts and t-shirts, which Edward thinks may be partly responsible for their difficulties.

"In other sports, such as volleyball, they make them wear long trousers when they play."

In 1983, Sudan's government implemented Sharia Islamic law and when President Omar al-Bashir seized power in a 1989 Islamist-backed coup, his government vowed to continue implementing it.

Sudan's criminal code bans women from wearing "indecent" clothes with a punishment of 40 lashes or a fine.

In July, a group of 10 young Christian women from the South Kordofan region were arrested for wearing skirts and trousers.

Four were fined while one was sentenced to 20 lashes for wearing trousers to court for her sentencing, which she is appealing.

The law has never been applied to The Challenge's players but Edward suspects the government's Islamist leanings have contributed to the neglect of women's football.

In 2011, the team moved to pitches of the Sudanese Football Association, who Edward said pledged to help with training and equipment.

The Sudanese FA did not comment directly on their kits but never delivered on their promises, so the team moved on and have since been buffeted from training ground to training ground.

Edward said she approached the FA and Sports Ministry offering to change their kit to something less likely to cause offence, but to no avail.

"Until now they say: 'Inshallah (God willing) we will help,' but nothing has happened".

Hasan Abu Jabal, the Sudanese FA's executive secretary, said there are women's teams in universities and some schools and others are being formed.

"We are trying to support them to practise the sport according to rules that take into account social customs," he said.

The Challenge has also faced difficulties with family attitudes, including the team's wiry roving midfielder Nedal Fadlalah, who joined in 2002.

Her family migrated to Khartoum from war-torn South Kordofan seeking a better life, like many of her teammates.

She played football with brothers and cousins growing up and rushed to join the team, despite opposition from relatives.

"Some members of the family opposed me playing football because I'm a girl -- they thought football is a boys' sport," she said.

They relented when she insisted, the first of many challenges she has faced alongside her teammates.

"We called the team The Challenge because we are steadfast and until now we've relied on ourselves," Fadlalah said.

The team was also hit by South Sudan's secession, as five players returned to the newly independent country.

Sudan was left with just one other over-21s women's team, based at the Ahfad University for women.

Edward has heard others are trying to form women's teams elsewhere but for the moment The Challenge plays local men's sides to hone their skills.

She wants The Challenge to represent Sudan, but failing that she has longer term plans to try to build a national women's team.

Several members of her team have trained abroad to become coaches, which they plan to put to good use.

"If I have 10 players who became coaches, in two years we could have 10 teams for women in Sudan and in two years these 10 teams could produce a national team," she said.

"And if Sudan gave us the opportunity to become the national team, no one will refuse," she added with a laugh.