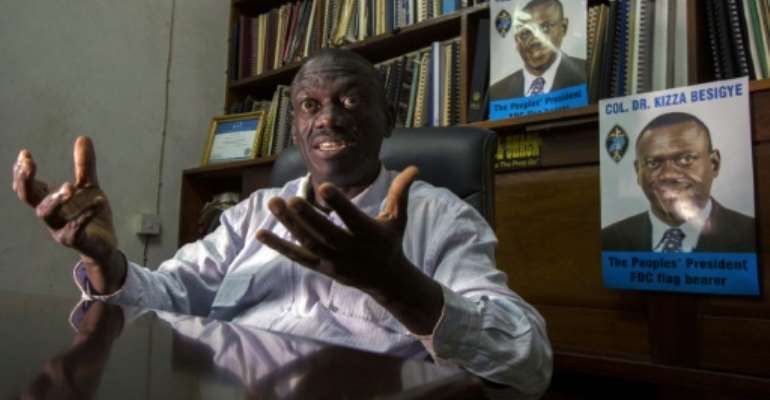 Kizza Besigye has told AFP in an interview in his office that he has had to challenge President Yoweri Museveni in order to see change in Uganda. By Isaac Kasamani (AFP)

"One Uganda, one people," the dozens of motorbike riding supporters chanted after a recent rally by Besigye, once personal doctor to veteran President Yoweri Museveni, now his greatest political rival.

"I didn't set out to be in politics, let alone be president," Besigye told AFP, saying he had been forced into the "unenviable situation" of having to challenge Museveni in order to see change.

The opposition Forum for Democratic Change (FDC) chose Besigye on Wednesday to be its candidate in next year's election, the fourth consecutive time he will run for the presidency.

Museveni, who has led the east African nation since 1986, has been endorsed by the ruling National Resistance Movement (NRM) to represent it in the vote scheduled for February.

"I would like to believe that the momentum for change is unstoppable," Besigye said.

Besigye had previously said he would not contest elections again after losing in 2001, 2006 and 2011, claiming free and fair polls were impossible.

He has since changed his mind and once again put himself forward, overcoming his challenger, former general Mugisha Muntu, for the FDC candidacy.

Besigye said he feared Uganda is "now very clearly at a crossroads", and demanded an overhaul of the electoral commission running the polls.

"If this matter is not corrected at this time, I dare say the country will be at a very serious risk of sliding back into political instability, into violence and chaos," Besigye said.

"We are very, very determined to do everything within our means to have changes in the management of the election."

Besigye said he is prepared to work with "anybody" to ensure a better Uganda, and opposition parties have said they will form a "Democratic Alliance" fielding a single joint candidate.

But with the main opposition leaders being influential former members of the ruling party, they struggle to offer a convincing alternative or to effectively criticise a system they befitted from, or in some cases helped create.

Besigye grudgingly admitted many had "questions to answer" about their time in power.

"Maybe all of us do, because at some stage all of us served in the dictatorship," he said.

Besigye said he also feared that Uganda's role in regional wars -- playing a key part of supplying troops to the internationally-backed African Union force in Somalia, as well as deploying forces to prop up the government in South Sudan -- meant Museveni was above international criticism.

"They've taken advantage of having a huge military security outfit, which they have found handy in dealing with certain regional hotspots," he said.

"Museveni benefits from that relationship, and the foreign countries benefit from him, each one knowing that in so doing the people of Uganda are not benefiting."

But Besigye does have some grass-roots support, despite the risk demonstrators face.

After losing in 2011, he led repeated anti-government protests, at which he was regularly arrested and held for hours before being released while his supporters were also chased, tear-gassed, beaten and arrested.

"He's popular everywhere, he is a leader who listens to everybody," said Swaibu Mugalu, 32, wearing a T-shirt with Besigye's face emblazoned on it.

While Besigye has less cash in his campaign chest than rivals -- especially the incumbent president who blurs party and state funds -- he inspires loyalty among followers, and said that he was more than willing to risk the tear gas and police batons once again.

"I'm lucky to be here, because my colleagues are not that lucky to be alive," he said. "In this kind of engagement, you are prepared for the worst."

Accra: One Killed As 4 Cars, 2 Motorbikes Collide At Anyaa
18 minutes ago