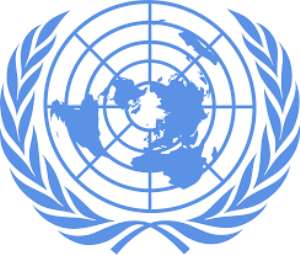 The Ghana Institute of Governance and Security wishes to congratulate the United Nations as it marks the 70 th anniversary of its existence and with the primary objective of maintenance of international peace and security.

We further take this opportunity to extend a goodwill message to the UN as the momentum builds towards the General Assembly which welcomes about 193 countries together from 3rd September, 2015 to January, 2016 at its Headquarters in New York, the USA to provides a world platform for deliberation, reshape it policy making and implementations, exchange of ideas on pertinent and sensitive matters of peace and security, political, economic and social issues affecting it primarily objectives.

As the UN General Assembly begins today GIGS wishes to call on every Ghanaian and the World at large to offer a sincere prayer for the United Nations so that through its 3months deliberation , homosexual issues such as gayism, lesbianism marriages should not be a prime agenda but issues of social and economic well being of the citizens of the world through balance and equitable distribution of the World natural resources as enshrined in the UN Charter and Resolution on permanent sovereignty over natural resources in General Assembly (GAR) Resolution of 1803 of 1962 and charter of economic rights and duties of states General Assembly Resolution 3281 of 1974 .

The present strife and migration from the least developed countries endowed with Natural Resources towards the West is as a result of an inequitable and exploitation of this World resources by the West to their advantage living the crumps to this nations which cannot meet their social and economic development to enhance the standard of living of this countries and their citizens.

Again, we give confidence to the UN to try to erase the notion of it been a weak confederation especially when it comes to enforcement of it charter on signatories countries and nations.

Without a doubt however, we acknowledge the complexity and turbulent challenges it faces across in ensuring relative peacekeeping operations, its objectives, and policies towards global peaceful coexistence.

However, we owe it a responsibility to remind the UN of it mandate especially in this trying times and age of emerging threats to national and international instability in many part of the world to provide the measures, strategy, and forward

We hope aside all the malfunction of UN, we encourage the attitude and will of the members to reinforce influence and highest commitment in addressing issues of religious extremism including groups such as Boko Haram, ISIS, and it associated insurgency causing destruction to peace and security.

We also call on the Security Council and the General Assembly for an urgent consideration of the Millennium Development Goal Report submitted by the eminent team which was constituted by the Secretary General Ban Ki- Moon recently.

The issue of climate change should also seriously be examined because of it destruction and other distressing against welfare of humankind rather than a mere verbalization.

The general assembly and the Security Council should revisit the use of the veto powers by the five founding members of UN: to quash the decision of the majority which will not promote and augur for world democracy in this 21st century.

Remarkably, as the world marks the 70th anniversary of the end of the last world war and the establishment of the United Nations which represent the major transitions that have taken place globally, we encourage the UN Members to push for a robust universal approach towards a more peaceful, prosperous, and equal and relatively protected society for civilization to thrive into the next century to come.

With our sincerest thanks.