Corruption at Public Institutions to be reported online 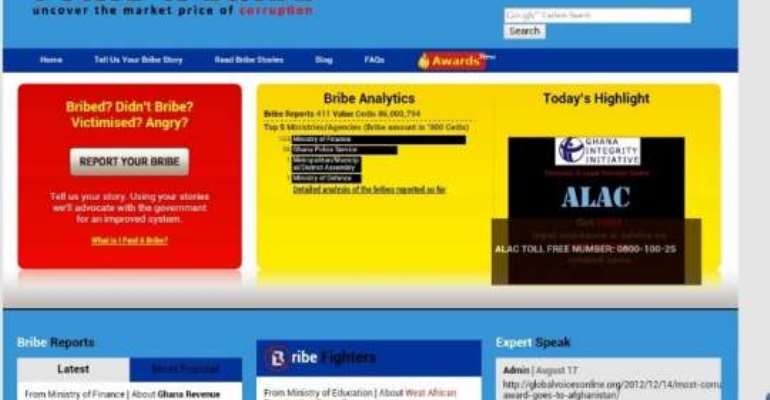 Cape Coast, Aug. 24, GNA - Ghanaians can now report any form of extortion or corrupt activity experienced at public institutions across the country by logging onto an anti-corruption website developed by the Ghana Integrity Initiative (GII) Consortium.

The website: www.ipaidabribe.org.gh was developed under the Accountable Democratic Institutions and Systems Strengthening (ADISS) project, being implemented by the Consortium, comprising GII, Ghana Anti-Corruption Coalition (GACC) and SEND Ghana.

Briefing participants at an Anti-Corruption workshop in Cape Coast on Friday, Mr Bright Sowu, Research Officer at GACC, explained that information gathered on the website would be used to argue for improving governance systems and procedures.

He noted that the public could report recent or old bribes they had paid at public institutions on the website. They could also register their resistance to a demand for a bribe.

Mr Sowu assured users of their security since their names or phone details were not required by the website, adding that those who report bribery issue have the opportunity to view an analysis of the reports received as of the time they visited the site.

He called on Ghanaians to patronize the website to help the consortium in its advocacy against corruption.

The four year project, initiated in 2014 and funded by the United States Agency for International Development (USAID, aims at contributing to ongoing effects to reduce corruption in the country.

It is being implemented in 50 districts nationwide including Cape Coast, Assin North, Agona West, Mfantseman and Efutu all in the Central Region.

The project, is expected to among others, lead to an increased civil society engagement in effective direct lobbying, law reform advocacy, increased use of anti-corruption reporting mechanisms by citizens.

It is also expected to increase implementation of the Public Accounts Committee's Recommendations and increase investigations, sanctions and prosecutions of corruption cases.

As part of strategies to implement the project, the consortium would train and work with anti-corruption campaigners and investigative journalists to conduct corruption perception cost and impact surveys, empower citizens to report corruption and collaborate effectively with the media.

Mrs. Linda Ofori- Kwafo, the Executive Secretary of GACC, noted that corruption in the country resulted from failed systems and stressed the need for revival of the country's systems and laws in order to reduce corruption.

She reiterated calls by the consortium for a review of assets declaration regime to include verification and publication of the declared assets.

Mrs Kwafo said it was about time Ghanaians realized the negative effects of corruption on the country and called on various stakeholders to play their respective roles to reduce the menace.