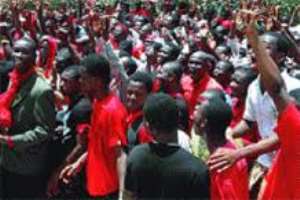 Tema, Aug. 21, GNA - Hundreds of traders at the Tema Community One market have demonstrated against the increase in property rates levied by the Tema Metropolitan Assembly (TMA).

Clad in red, they registered their dissatisfaction by closing their shops in the morning and marched to the Assembly holding placards.

The traders said the previous rate of GHÈ¼24.00 has been increased astronomically to GHÈ¼240.00

Madam Vida Afuakwa Tetteh, Assistant Secretary for the Tema Community One Market Traders Association, said when they threatened to demonstrate, the TMA slashed the amount to GHÈ¼120.00, which is 50 per cent of the proposed increase.

Madam Tetteh said they informed the Assembly that they could only afford 30 per cent but the Assembly refused to accept their offer leading to the demonstration.

She said they have been meeting with the Assembly since April but the TMA has refused to listen to their plea.

Madam Tetteh said it is worrying that there are no toilet facilities and street lights in the market yet TMA is only concerned about collecting more levies from them.

Mr Joseph Nii Laryea Afotey Agbo, Greater Accra Regional Minister, receiving the petition on behalf of the TMA, said a modern toilet facility would be provided for them.

Mr Afotey Agbo also gave the assurance that plans are far advanced for erecting of street lights in the market.

He promised to meet with the TMA and the traders to find a solution to the misunderstanding.