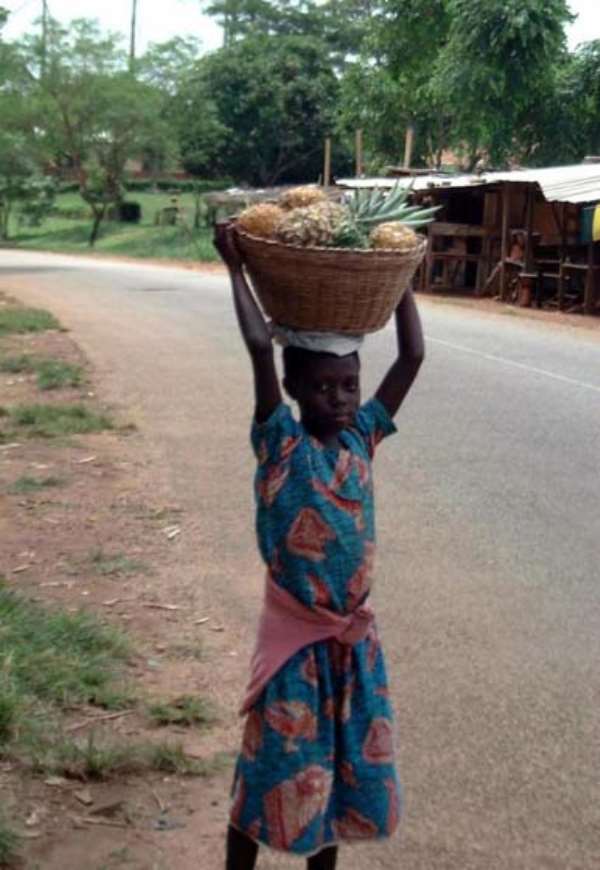 Kumasi, Sept. 28, GNA - A household survey conducted by the Ghana Statistical Service in 2003 has revealed that about 1.5 million children under the age of 15 were estimated to be working in Ghana, even though the Children's Act stipulates 15 years as the minimum age for employment.

The survey said 1.031 million children under the age of 13 were in child labour in violation of the minimum age of 13 for light work, Superintendent Elizabeth Dassah, National Director of the Women and Juvenile Unit (WAJU) of the Ghana Police Service, said in Kumasi. Speaking at the opening of a two-day sensitisation workshop on child issues on Monday, she said, the most poignant observation of the survey was the fact that even though the minimum age of employment in hazardous labour was 18 years, children as young as five to 17 years were engaged in this nature of work.

The sensitisation workshop, the first in a series was being organised by the Police Administration under the sponsorship of the International Labour Organisation (ILO) and United Nations Children's Fund (UNICEF). Police Chief Inspectors, Inspectors and Non-Commissioned Officers (NCOs) from Ashanti, Eastern and Brong-Ahafo regions are attending. Superintendent Dassah asked the police to wake up to the reality that, Ghana was a source of transit and destination country for women and children trafficked for the purposes of sexual exploitation and forced domestic and commercial labour. She said in spite of efforts to stem the problem, a lot more needed to be done as the menace of child labour was not abating and was endangering the lives of the children, who formed the human resource base of the country. Supt. Dassah said, however that, there was no specific law on trafficking and laws under which traffickers were prosecuted were inadequate.

Moreover, she said, the Children's Act does not empower the police to directly take action on offences on child labour, they are only, she said to react to complaints from Labour Officers, members of social services, committees of district assemblies and the Department of Social Welfare.

Above all, the nature of child labour is such that it does not lend itself to easy prosecution. Unlike other offences where the victim willingly report to the police, the victim of child labour feels he or she is benefiting howbeit temporarily from the work and would therefore not co-operate during investigations.

Superintendent Dassah told the police personnel that investigations of this nature demanded painstaking efforts and that, since the services of WAJU were not replicated in every nook and cranny of the country, the regular police and everybody must therefore help in eradicating this social menace.

Mr Ofosu-Mensah Gyeabour, Ashanti Regional Police Commander, who opened the workshop, said the plight of numerous Ghanaian children in hazardous forms of labour was a cause of grave concern to all. He said a demand had therefore been placed on the law enforcement agencies like the police to wake up to the clarion call of enforcing relevant existing laws.

Assistant Commissioner of Police Gyeabour said it was against this backdrop that the Police Administration initiated the training programme to enhance the capacity of police personnel handling the increasing complex nature of child labour.

To ensure a holistic approach, he said, the Police Administration would liaise with relevant agencies to form more child panels and family tribunals in order to speed up the backlog of cases involving child welfare and family related issues, adding that, the activities of these tribunals will go a long way to create congenial environments for children.

Mr Emmanuel Otoo, Programme Manager of ILO said the sponsorship of the workshop by ILO and UNICEF was to aid the police to be able to eradicate child labour and other children related issues.

He noted that after the enactment of laws, the chunk of the responsibility to enforce them, then rested with the police but wondered whether the police were adequately informed about child labour.

The workshop, he said, was therefore to strengthen the skills and sharpen the knowledge of the police in the area of child labour and also called for suggestions and proposals from the police on how to combat the problem completely from society.