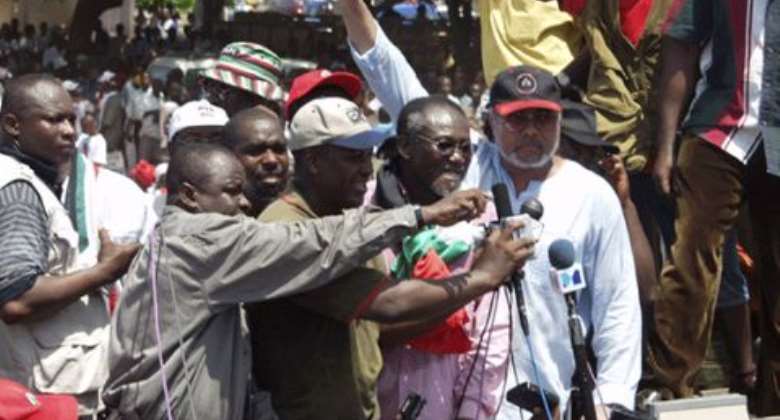 ... Mills won't use state money to renovate his house or travel by heart The National Chairman of the NDC, Dr Obed Yao Asamoah, has said that Prof. John Evans Atta Mills led government will not use state money to renovate his private house. According to him, Prof. Mills, a man of integrity, has respect for rule of law and humanity, will govern the nation in truth, humility and honesty. Speaking at a packed crowd at the launch of the party's campaign over the weekend in Cape-Coast, Dr. Asamoah who did not mince words on the calibre of Mills said that, Mills government would not embark on shoddy deals like the IFC and CNTCI loans and others.

“This is a bad governance,” Asamoah said.

Predicting things that the Prof.-led NDC administration would do, the former Attorney General and Minister of Justice, stated that Mills would not collapse industries and companies to increase unemployment in the country, citing the Volta Aluminium Company (VALCO) as an example.

In an attempt to make a mockery of President John Agyekum Kufuor, Dr Asamoah maintained that the social democrat-led government of Mills would not engage on frivolous travels or trips to the detriment of Ghanaians.

“Prof. Mills will stay in the country to solve problems. He will not run away from problems and be travelling up and down.” His remark attracted large applause and commendations not only from the crowd but also from the high table.

He said it was uncalled for the government to increase workers' salaries in a month and slash it the next month and blame it on computer error; promising that a Mills-led administration would look into the salaries of workers and make it meaningful to them.

On the electoral scene, the NDC national chairman hinted that the party would not undermine or manipulate the process to the disadvantage of any opposition party saying, “the widely property-owning democracy and “moneytizing” that has characterised the NPP government woould be relegated to the background in the annals of the political history of the country.”

Dr. Asamoah pledged the preparedness of the party to respect personalities and also not do anything to devalue the African.

Later Dr. Asamoah introduced the presidential candidate, Prof. J. A. Mills, to the supporters and waited on the platform untill Mills delivered his address and subsequently introduced Hon Alhaji Mohammed Mumuni - his runningmate.

Before Dr. Josiah Nii Armah Aryeh, General Secretary of the party, described Mills as a son of the land of Cape-Coast and that the long-awaited dream would come into fruition, come January 7, next year.

According to him, NDC represented the alternative to the rampant allegations of corruption in the NPP government, which invariably Mr. Kufuor encourages.

The general secretary, who held the opinion that the NDC would win the elections, called on the members to resist any moves by the ruling government to rig the elections.

He cited acts of violence that had occurred during the NPP primaries as credible evidence of how the NPP was going to conduct itself in the December elections.