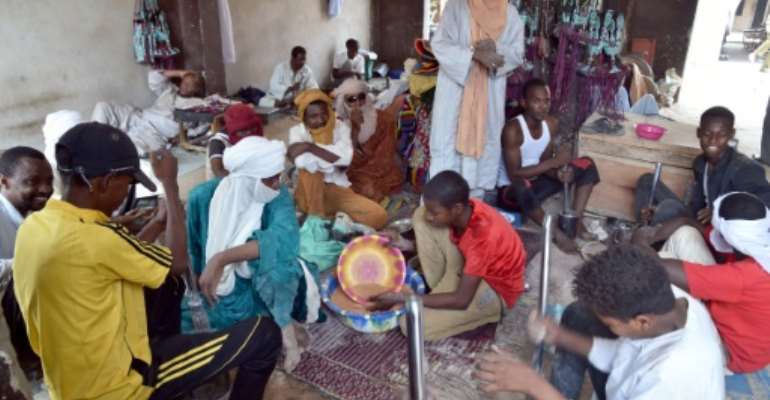 People sift crushed stones as they search for gold in the craft village of the city of Agadez, in northern Niger. By Issouf Sanogo (AFP)

Agadez (Niger) (AFP) - At least 100 men sleep on mats at the bus station in Agadez. They are gold panners, heading for the far north of Niger or returning as gold fever sweeps the country.

Some say a banal incident triggered the rush. "Some people got their car bogged down in sand in the desert. When they cleared it, they found a few nuggets. That was in 2013, near Djado," says El-Hadj Mohamed Sale, a former guide who knows the Sahara well.

"The place was a gully where the wind had swept sand away. So there was only gold," he adds. "They made three round trips. Once they returned for the third time, everything took off."

Whether truthful or fanciful, the legend of the Djado, an arid, unhospitable plateau lying below a chain of low mountains, went viral in Niger and other poor neighbouring countries.

Tens of thousands of gold diggers from around Niger, Chad, Sudan and elsewhere are prospecting in precarious conditions, more than 1,000 kilometres (620 miles) northeast of Agadez, a historic town prized as a UN World Heritage Site.

The most precious commodity in the Djado is water -- sometimes paid for in gold nuggets rather than the local currency, CFA francs -- but to extract enough gold makes the hardships worthwhile.

"I live very well thanks to the gold I found," smiles Ibrahim Aboubacar, who prefers to be called Sidiq. In an electric blue T-shirt and matching Bermuda shorts, the young Nigerien looks chic without being flashy.

Aged 22, Sidiq attended school, but stopped to become a gold prospector before he acquired his high school diploma.

"I have plenty of friends who have diplomas and degrees. They're in (the southern capital) Niamey, but they don't have any work," he says.

"At Djado, there are people who will earn one million CFA francs (1,520 euros, 1,700 dollars), two million. They could never have imagined earning that much in a month."

Sidiq refuses to say exactly how much gold he discovered during two expeditions to Djado, saying only that there is a lot.

"At the start, people were able to come back to Agadez with three, four, even five kilos of gold," recalls Hamidou Ismaila, a buyer in his 30s with whom Sidiq does business.

Questioned by AFP, staff at the ministry of mines in Niamey said they had "no idea" how much gold was being taken out of the territory, but the amount has proved big enough to make significant changes in Agadez.

New houses have mushroomed on the outskirts of the town known as "the gateway to the desert", which is today a staging post for Africans trying to make their way north as illegal immigrants to Europe.

The number of stores in Agadez selling and mending metal detectors, shovels, wheelbarrows and other supplies is on the rise. They are taking over from tourist shops, which foundered as people stopped coming because of the activity of jihadist groups in the region in the past few years.

The Djado, located about 200 kilometres from Libya, Algeria and Chad, lies at the heart of dangerous territory, but the labourers who work there say they are not disturbed by armed Islamists.

"The gold rush has come at a good time. It has enabled many Niger nationals to try their luck," says Agadez mayor Rhissa Feltou, aware that Niger is one of the world's poorest nations, prone to food crises.

"We thank God for having given us this gold," agrees Ahmed Hanjar, an overseer in the market, as about a dozen men, young and not so young, crush rocks and sieve the residue in water.

With bare hands, they use mercury to extract gold nuggets, a practice still widespread among small-scale miners in developing countries in spite of the toxic health risk to the kidneys, brain and nervous system.

Gold extraction also means pollution and armed theft. At Djado bandits attack miners and traders, according to Sidiq. A gang stole a dozen metal detectors from one of his friends before shooting at him, but "fortunately, he wasn't hit".

"The population here has a culture of laziness," says Ibrahim Manzo Diallo, a local press baron who founded Air Info, the main newspaper in the north.

"Some consequently prefer to be highway robbers with weapons and 4x4s on the fringe of the desert, to steal from the gold diggers who exhausted themselves for months in the Sahara."