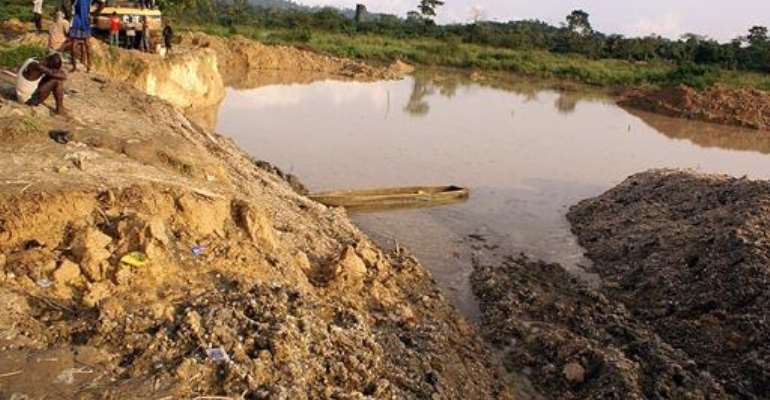 Human Rights Watch claims that gold used in jewellery and electronics may have been sourced from illegal mines similar to this one that collapsed at Dunkwa on-Offin, Ghana on June 27, 2010. By Adadevoh David (AFP/File)

Accra (AFP) - Gold used in jewellery and electronics around the world may have been sourced from mines using illegal child labour in Ghana, Human Rights Watch claimed Wednesday.

A report by the group found that while most international refiners trading with Ghana had responsible sourcing policies, it was still hard to ensure their gold was child labour-free.

Ghanaian laws ban children below the age of 15 from working and those under 18 from toiling in hazardous conditions such as in mines.

But the use of children as young as nine is still common in small-scale mines -- most of which operate illegally -- that account for about one third of the industry, the report said.

That not only put children at risk from a heavy workload and dust that causes lung diseases but also from mercury, which is used to separate gold from other minerals easily and cheaply.

Mercury, which attacks the central nervous system and can cause brain damage, is particularly harmful to children, as their systems are still developing, causing irreversible effects.

The report was published before the World Day Against Child Labour on Friday, a United Nations-backed initiative to highlight the situation facing the world's estimated 215 million child workers.

Ibrahim, one of 44 child miners interviewed by HRW, started working with mercury aged 17 and developed a tremor in his hands.

"I was told (by the group leader), if you work with mercury for a long period and especially baking gold and use your bare hands, your fingers will start shaking... It happens often... It affects my writing," he was quoted as saying.

Local traders buy gold at or near Ghana's mines and then sell it to other parties. Most of the gold is eventually exported to international gold trading or refining companies.

Many local traders source their gold from unlicensed mines, where child labour is common, and those further up the supply chain turn a blind eye to the metal's provenance, the report said.

One trader in Dunkwa-on-Offin in southern Ghana was quoted as saying he doubted due diligence was possible because "if I ask people where they got their gold, they will not sell to me."

Gold export companies in Ghana said they had strategies in place to ensure their metal was not sourced with child labour.

One company said it only buys directly from licensed mines where there is no child labour and ruled out dealing with traders whose gold it is difficult to source.

Others rely on traders, however, and some sometimes buy small amounts of gold from unknown intermediaries.

One company said it was able to trace 90 percent of its gold back to the mines, implying the remaining 10 percent may be purchased from traders and cannot be sourced, HRW found.

- 'Weaknesses' in due diligence -

HRW said it found that five of the six international gold refiners sourcing gold from Ghana "were conducting significant due diligence steps", including on-site inspections.

But "based on the available documentation, Human Rights Watch found that several of these companies had weaknesses in their due diligence procedures, such as a lack of systematic child labour monitoring or a lack of transparency," it added.

It called on all companies to install regular monitoring with unannounced inspections and full documentation at every stage of the process from extraction up the supply chain.

Mahama becoming President again is one of the greatest calam...
44 minutes ago

What Shatta Wale did was childish and stupid — Nii Ayitey An...
52 minutes ago