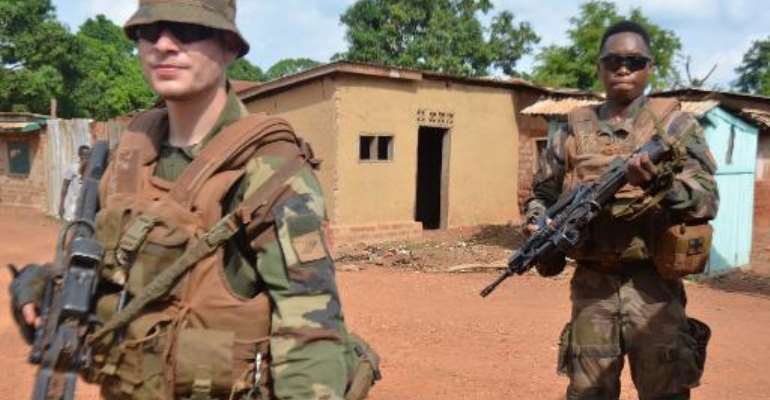 France launched Operation Sangaris in December 2013 in a bid to break the cycle of violence triggered by a coup earlier in the year. It had a peak strength of 2,000 troops before beginning its drawdown in March. By Patrick Fort (AFP/File)

Paris (AFP) - France will more than halve its troop deployment in the Central African Republic this month, as part of its handover of the peacekeeping mission to the UN, the army said on Thursday.

"The number of forces will go from 1,700 to 900 soldiers in the coming month," said French army spokesman Gilles Jaron.

"More and more, our presence will be focused on the capital Bangui. From Bangui, we will be able to deploy extremely quickly in support of UN forces," he said, adding that several French bases would now pass under UN control.

France launched Operation Sangaris in December 2013 in a bid to break the cycle of violence triggered by a coup earlier in the year. It had a peak strength of 2,000 troops before beginning its drawdown in March.

The United Nations launched its own operation in 2014, and now has some 10,000 peacekeepers in the country, where it hopes to oversee elections by the end of the year.

Thousands have been killed and almost a million displaced by fighting between different ethnic and religious groups since the coup in March 2013.

France has always been open about wanting to reduce its troop presence in its former colony, so that they can be deployed for counter-insurgency operations in the Sahel region of west Africa.

Its mission in Central African Republic has been tainted by allegations that several children were sexually abused by French soldiers in the first six months of the deployment.

An investigation is ongoing into the claims against 14 soldiers, which were not made public until they were leaked to the British press.

UN chief Ban Ki-moon on Wednesday ordered an independent, external review of the case and the French defence ministry announced on the same day they were declassifying internal documents over the handling of the allegations.