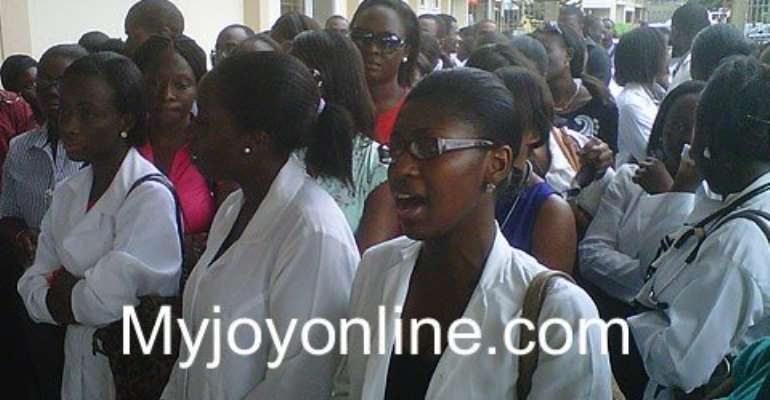 The 2014 Junior doctors at the Komfo Anokye Teaching Hospital in Kumasi have begun an indefinite strike from today June 2, 2015 to demand the payment of their salaries.

The house officers say they have not been paid for nine months and they do not intend to continue working until these monies are paid in full.

In a statement issued Monday June 01, 2015 and copied to Myjoyonline.com, the doctors say they will not listen to any more promises that will end up unfulfilled.

“ It has become very necessary for us to take such drastic decision basically because we strongly believe that the government has not given us the due treatment with reference to our letter which we sent to the minister of health on May 16 and all the stakeholders involved in our salary processing and payment including, the office of the President.

“….We are therefore telling government that until our full nine months salaries have been paid, we are not coming to work,” the statement said.

Speaking on Adom FM’s morning show ‘Dwaso Nsem’, President of the junior doctors Dr Michael Boateng said “we have gone beyond promises, in order for a doctor to work well; they must be physically, emotionally and financially sound.”

However, Public Relations Officer (PRO) of the Ministry of Health, Tony Goodman says the failure of the ministry to pay the workers is not intentional.

He said the Controller and Accountant General's Department is waiting to receive details of a biometric registration the doctors underwent to allow the release of the salaries.

The unavailability of the biometric data has accounted for the delay in the payment of the salaries, he added.

He said the ministry is doing all it can to ensure that the doctors' salaries are paid within the shortest possible time.

The PRO pleaded with the doctors to resume work whilst the Controller and Accountant General’s Department works to resolve the issue.

Yesterday, the Ghana Medical Association (GMA) also threatened to embark on a strike in July if government fails to sign and negotiate conditions of service for its members.

The Association in a communique accused government of “not taking any step to solve the issue of lack of conditions of service” for its members “four months” after serving government its initial notice.

Here is a copy of the statement
Story by Ghana | Myjoyonline.com | Naa Sakwaba Akwa | [email protected]