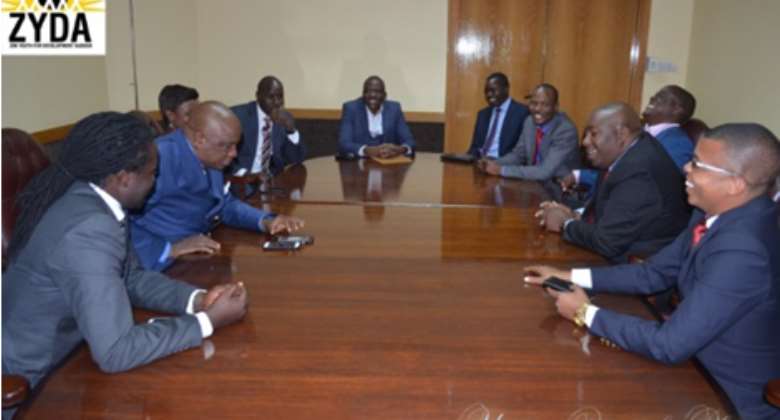 The organization recently held a youth packed interactive function in Harare, at the Crown Plaza, Monomutapa Hotel under the theme ‘Economic Growth: Zimbabwe Where To from Here’ where realistic concerns were raised and practical solutions were instantly offered.

Mr Liberty Bizure, the organization’s chairperson ignited the heated interactive mood by highlighting the real issues affecting the youth and then asked the speakers to explain the practical businessand official government stance in defining the way forward.

In response to the issues that were raised, Minister Kasukuwere who acknowledged the economic challenges being faced in the country, encouraged the youth to be open-minded, creative and hopeful in order to take charge of the economy.

“You are gathered here because you believe that it can be done and it is this belief that gets things done. If we don’t have hunger for success, we will have problems.

Don’t hold on to problems but rather keep on inviting the relevant people to come and help you in addressing these issues.

I have not come here to give you money but to make you angry by provoking you into doing something. Our president is a firm believer in you being the champions of our economic liberation and as such, the economy and the country is your hands.” He said.

He went on to advise the youth to avoid shortcuts but rather to come up with brilliant practical ideas that helps them to get the necessary funding.

“Money follows a good idea, money is attracted to you if you have an idea for it, don’t take shortcuts, opportunities will open up soon” added Minister Kasukuwere.

The youths howevertook advantage of this rare interactive platform to express their displeasure regarding the lack of respect and enforcement when it comes to policy implementation.

They highlighted the challenges they are facing in their quest foreconomic participation and involvement, citing that the 25 percent quota allocated to them is not being respected.

A number of the youth also challenged the cumbersome and confusing processes that are involved in the formalisation of business ventures and the various taxes thereunto which makes it difficult to operate profitably.

Information dissemination was also highlighted as another hindrance to economic empowerment as the youth complained that there are no readily available effective mechanisms that help them in sharing ideas and in mobilizing resources.

On this note, Minister Kasukuwere encouraged the delegates to take advantage of platforms such as the ones provided by ZYDA and then form chapters in other areas where it has not yet reached.

He advised the ZYDA leadership to act as a link between youths from various areas across the country and the various relevant authorities towards making sure that information pertaining to economic empowerment is smoothly relayed among stakeholders.

The youths were also concerned that vending was turning almost everybody into vendors thus making it difficult to get buyers but the Minister challenged them to grab opportunities that has arisen in other areas of the economy such as mining, media and construction.

While responding to complaints by some youths who are operating formally registered business that has been rendered unprofitable by illegal vendors, both Doctor Phillip Chiyangwa and Minister Kasukuwere concurred in speaking against illegal street vendors.

“As an Environment Minister, I think selling vegetables without proper facilities for sanitation is not good and acceptable.Vendors who want to intimidate people must stop that because we want to have a country that is orderly.” Honourable Kasukuwere said.

“All illegalities in Zimbabwe must be stamped out because this kind of vending results in diseases like Ebola which are transmittable” Doctor Chiyangwa supported.