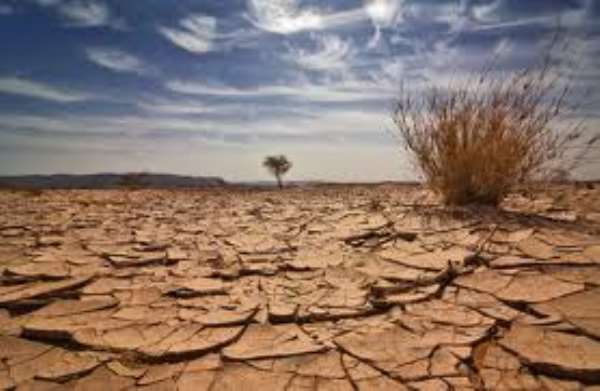 Water, an essential commodity in human development is looming in Ghana at a faster rate as a result of climate change which has been a global threat and it has taken the center stage in the development agenda of both developed and developing countries. This phenomenon has indeed brought a significant change affecting the environment and the economic activities such as farming and water production.

Climate change simply refers to the increase in the average global surface temperature caused mainly by anthropogenic increase in concentration of greenhouse gases, particularly Carbon Dioxide (CO2), in the earth’s atmosphere. Several research conducted by renowned scientists have proven that, the increasing trend in Carbon Dioxide gas emission has consequently increase the temperature over the years and this is attributed mainly to human activities including influx of industries, deforestation, burning of fossil fuel for energy and transportation, mining of mineral and agricultural practices leading to the release of this gas at faster rate than how it should be naturally. This has certainly speeded up the warming of the earth within the short period of time to the extent that, the earth can no longer adapt the situation. Many water and river bodies are dying, rendering economic hardship indirectly to the people whose economic livelihood depends on this resource.

Hypothetically, ‘could the effort of the policy makers be implemented in order to mitigate the current situation’? Rain pattern has changed drastically and continue to change leading to a general reduction in annual river flow in Ghana by 15-20% for the year 2020 and 30-40% for the year 2050 CSIR-WRI 2000. In view of this, climate change and its effects appear to be accelerating faster than scientists had predicted. Agriculture, the major backbones of Ghana’s economy, needs much attention as quiet significant number of these practices is rain fed type. The reduction of hydropower generation resulting into Dumsor-Dumsor literally means persistence power outages, cannot be over emphased as it gradually collapsing businesses and other economic activities. Under this condition, water quality of freshwater is compromised especially rivers and streams which are vulnerable to pollution associated with human waste, compelling the water producing companies opting for groundwater abstraction which is capital intensive. It is prudent for the policy makers to act now!

Several interventions have been made by the government and other civil societies to address the situation as it is issue of concern globally and virtually affecting all sectors of the economy. However, much more must be done in order to slow the progression of climate change, even if we cannot stop it completely due to greenhouse gases already in the atmosphere. Even in well industrialized nations where the emission of this greenhouse gases are in abundance serious measures have been adapted to minimize the situation therefore similar steps can be taken in Ghana to achieve result.

SUGGESTIONS
As studies have predicted at CSIR-WRI that without climate change Ghana will become water stress in the year 2025, its implication is that certain human activities that could result in rise in temperature apart from burning of fossil fuel must also be taking into consideration to deal with.

In conclusion, much has been said about the consequences of climate change. Therefore, it is important for every individual to contribute his/her quota to slow it down by way of spreading the negative effect it has on the economy to the general public.