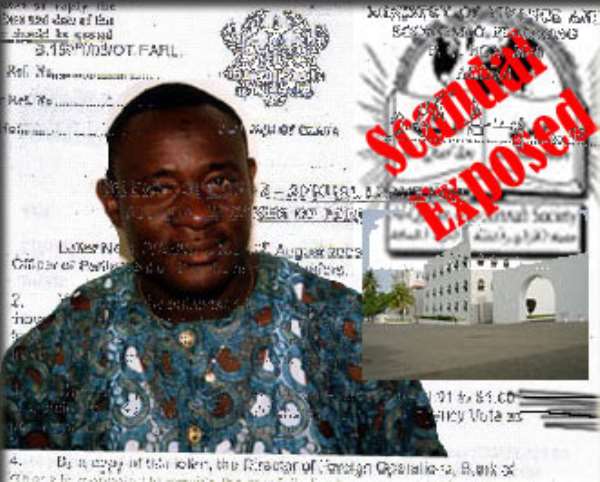 Alhaji Moctar Bamba, MP for Wenchi East and former deputy Presidential Affairs Minister and the Constituency Chairman of the New Patriotic Party (NPP), Alhaji Musah Seidu, have separately blamed the defeat of the MP at the constituency primary on the expose by The Chronicle of alleged corruption by the ex-deputy minister.

Alhaji Seidu explained in an interview with the paper that given the impact of the serious allegations that were leveled against the former deputy minister, which were carried by The Chronicle early this year, the delegates at the primary last Tuesday, had the impression that Bamba was not a good material for the party for the December polls and consequently voted against him.

But the embattled former deputy minister has jumped to his own defence against the issues relating to the scandal at the office of the president in which he was accused of being the main actor.

Speaking in separate interviews on Adom FM and Radio Gold yesterday, the MP said that The Chronicle's stories against him were deliberately planted by some members of his own party as part of a plan to oust him from parliament.

“I know the people who did that to me and I made this clear when the story, (referring to The Chronicle story) came up,” he said.

But the former minister refused to disclose the names of his accusers when he was challenged to do so by his interviewer on Radio Gold, maintaining that he would do so at the appropriate time.

Bamba who resigned his position as deputy minister following The Chronicle publications maintained that it had not been proven that he had indeed done anything wrong stressing that the issues the newspaper raised still remained mere allegations.

He boasted that he was still roaming in the streets of Accra, Kumasi and Wenchi as a free man and wondered why he had not been sent to court if indeed he had been found to do something wrong.

The beleaguered MP, however, declined to answer questions on why he resigned his position if he knew at the time that he had done nothing wrong and whether it was not true that he made several attempts to bribe the Chief Investigative Reporter of The Chronicle, Raymond Archer, to stop the story.

In his opinion, he lost the seat to his opponent, Prof. George Gyan-Baffour, who is the Director General of the National Development Planning Commission, as a result of the activities of the constituency, regional and national leaders of the party.

The MP disclosed that prior to the primary, there had been clear evidence that the leadership of the party had plotted to prevent him from contesting the parliamentary election as a candidate of the party.

“Because of the things that were happening prior to the holding of the primary, I had made it clear to the leadership of the party that if I lost I was going to run as an independent candidate. I made it clear that I did not like what was happening and I even signaled the Castle,” he complained.

He accused his opponent of giving each delegate ¢5 million to influence them to vote in his favour, though he admitted that there was no way a candidate could go to a party's primary without spending some money.

“I am prepared to go solo even if I would be sacked from the party. I will continue to be a sympathizer of the NPP and I want to win the seat for Kufuor who still loves me as his son.

It is very sad that those of us who really suffered to make the NPP a strong party are being removed as parliamentary candidates,” the distressed MP lamented.

Meanwhile, the General Secretary of the NPP, Dan Botwe, has refuted the allegations of Alhaji Bamba that the leadership of the party had manipulated the primary to ensure his defeat.

Botwe stressed that before primaries were held, the aspiring candidates were made to sign an undertaking to indicate their approval of the procedures. In the case of the Wenchi East primary, according to the NPP chief scribe, Bamba duly signed to indicate his satisfaction of whatever had transpired prior to the election.

The general secretary reiterated his party's commitment to ensuring discipline in the party, adding that the party would not hesitate to take disciplinary action against any member who would go contrary to its rules, an indication that Bamba's decision to go solo could cost him his membership of the party.