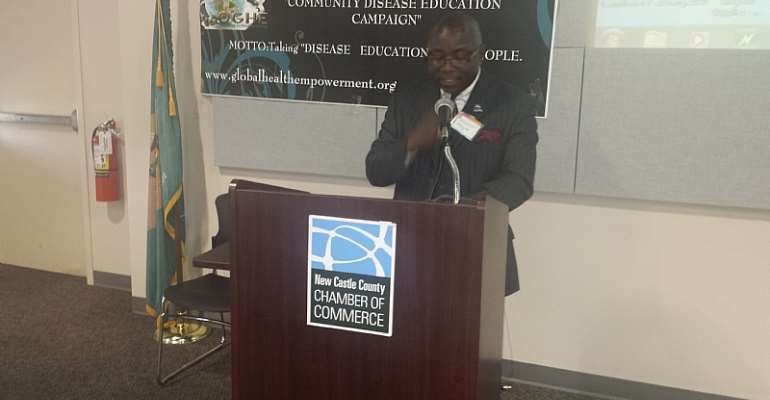 New Castle, Delaware: The Chief Executive Officer(CEO) of the US based Global Health Empowerment(GHE), Robert Vollay has described the world’s response to the outbreak of the deadly Ebola Virus Disease(EVD) in West Africa as reactionary.

Mr. Vollay said there is a need for the world to become proactive in ensuring that diseases such as Ebola, which continue to threaten longevity,especially in developing countries are contained.

Speaking recently at the New Castle Chamber of Commerce in Delaware, when he delivered the launching address of the newly established GHE, a Liberian owned international non-profit human service agency headquartered in Delaware said, by the time the international community, especially the scientific and medical world intervened and successfully halted the disease, the damage had already been done in the affected countries and it was threatening the entire universe.

Since last year, EVD has claimed 11,000 human lives in the three West African countries of Liberia, Guinea, and Sierra Leone. In Liberia, 4,700 lives were lost. On May 9, 2015, the World Health Organization(WHO) declared the country Ebola free after 42 days of new cases. Guinea and Sierra Leone are still combating the spread of the disease.

GHE is dedicated to conducting research, propagation, and the distribution of public health information on preventable and treatable diseases before they strike or surface in a given community. “Our aim is not just to talk about diseases; we want those we serve to become knowledgeable about various diseases in terms of prevention, mode of transmission, treatment options, myths, and facts,” CEO Vollay noted.

He said GHE would undertake the establishment of community based initiatives and the provision of resources to combat diseases and viruses with the sole purpose of promulgating global health awareness. “Obviously the tools for achieving our goals will include education, training, information campaign, and community based resources, private or public that will be geared toward creating a well-informed community where its residents are equipped with the basic knowledge of what dangerous killer diseases are and how they can protect themselves against such diseases.”

Mr. Vollay said GHE is determined to take its public health crusade to all states in the Americas and other nations of the world. GHE is a 501c (3) entity and it was founded in the year 2014 in the State of New Hampshire.

Making remarks at the occasion, the Acting Chairman of the Association of Liberian Journalists in the Americas (ALJA) interim leadership, Moses D. Sandy welcomed the establishment of the agency. Mr. Sandy lauded the creation of the GHE in the global fight against global diseases.

“The role of the GHE in the broadcast of public health messages to people in communities, villages, and towns at this can’t be overstated,” the Acting ALJA boss emphasized. Mr. Sandy thanked the GHE family for the bold ACTION taken in the prevention of deadly and treatable illness through public health education.