Cyprus, Greece and Egypt agree to step up 'terror' fight 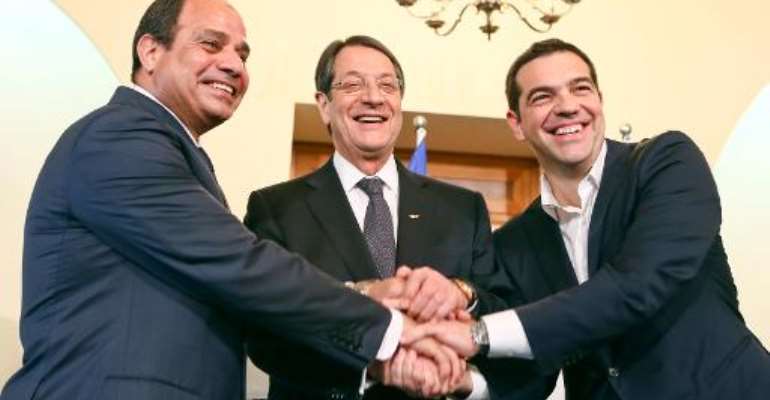 Nicosia (AFP) - Cyprus and Greece on Wednesday agreed with Egypt on the need to step up cooperation in the fight against "terrorism" in the troubled eastern Mediterranean region.

In a declaration, they said the "scourge of international terrorism" now threatens Europe, the Gulf, and the Middle East and North Africa, as well as the Sahel region and sub-Saharan Africa.

"We strongly condemn all terrorist actions and call upon all states to actively and effectively confront this menace and to step up cooperation on security matters with a view to countering extremist groups and exposing their political and financial supporters," they said.

The three agreed to jointly combat terrorism and violent extremism for the sake of security in the eastern Mediterranean, a region virtually encircled by conflicts.

"We are encouraged by the recent gains of the Iraqi forces in Iraq with the support of the anti-ISIL international coalition," the statement said, using another name for the Islamic State (IS) jihadist group.

Anastasiades, Tsipras and Sisi expressed their "support for the legitimate government of Yemen and for the preservation of its unity and territorial integrity".

They said the only way forward was for UN-led efforts to resume inclusive talks in Yemen, where an advance by Iran-backed Shiite rebels has forced President Abedrabbo Mansour Hadi to flee to Saudi Arabia.

They said they were "gravely concerned over the deterioration of the security situation in Libya" and the growing terrorist threat affecting security and stability in neighbouring countries.

The leaders of Cyprus, Greece and Egypt said they were committed to tackling the often deadly problem of migrant trafficking across the Mediterranean.

"We agree to mobilise all efforts at our disposal to prevent further loss of life at sea and to tackle the root causes of the human tragedy that we are facing."

U/E: I'll Restore Jobs Of Collapsed Banks’ Staff Who Were La...
22 minutes ago