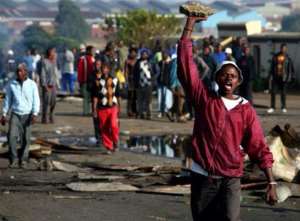 Since the violent attacks on blacks in South Africa started about a week ago, several reasons have been attributed to this, many of them a cacophony of emotions. Like I have earlier written in my XENOPHOBIC ATTACKS: LESSONS FROM GHANA I will look at the issue from the point of view of a realist, rather than emotional.

Let us spare the lousy Zulu King for his puerile unrequested “appeal” to non-South African nationals to “leave the country to wherever they came from” which is widely believed to be the immediate cause of the attacks. Let us equally take with the wave of the hand, the tactless statement from South African minister for small business development Ms Lindinwe Zulu who was quoted to have said that foreigners should share their trades secrets with lazy South Africans in other to prevent their shops from been looted.

Let us also laugh over the naughty remark from a supposed parliamentarian who noted that foreigner actually take over the wives of South African hence South Africans have remained bachelors. The ruling African National Congress (ANC)’s refusal to condemn the Zulu King’s statement is quite surprising but understandable.

Not all silence are golden the ANC’s case is rather political! The deployment of troops when lives have been lost by the Jacob Zuma Government is, to me, just an afterthought. It appears there is opium that everyone has taken in that country. That opium is working wonders more on the masses than no other. This strengthen my belief the present discontent appear more like a psychological trauma for black South Africans than a political issue!

At this point, I fully agree with Frantz Fanon in his wonderful book The Wretched of the Earth where he documented the psychological and psychiatric trauma caused by colonization upon the collective lives of the “Wretched” which can only be healed through a radical process of building a broad social movement for decolonizing the minds of this “wretched”. This typifies the situation in South Africa and many other African countries today.

Most people outside South Africa find it strange that after over twenty years of the end of the racial Apartheid but “national” discrimination still lingers on. Those who have read Frantz Fanon’s book should not besurprised. In the 1980s Nigerians in connivance with their government looted Ghanaians sending them back to their country. This was about twenty years after Nigerian Independence from Britain.

This was what made Fanon, writing in 1961, opined: “… the masses of unemployed, the small artisans and the craftsmen on their part line up behind this nationalist attitude… they follow in the steps of their bourgeoisies.”(Fanon, 1961: 125). Can you now see why we noted that it is more of the elites working on the docile minds of the unemployed, the poor and the masses in the country? Is there any variation in the actions of the government, the Party and the traditional leaders on the one hand and those of the masses on the other hand?

If you take a look at those rioting in the Durban and other places, most are in their twenties or early thirties. Invariably, they didn’t really witness the Apartheid oppression in its full regalia. It takes more than mere oratory prowess to convince these people that blacks who are in the same positions with those in South Africa are the cause of their sufferings. I still don’t know what has happened to the whites who stay in the choice areas of Johannesburg, Pretoria and Cape Town!

I am still trying to understand the reasons for the black South African inferiority complex even after Apartheid. The jobless school dropout watches the hard working Mozambican with suspicion and blaming him for his joblessness. The poor artisan finds everything wrong in the Namibian physician having a job that he does not have. Even the prostitutes see ladies from other nationals as a potential competitor in the trade. This was the situation of Ghanaians in Nigeria.

Nigerians wanted Ghanaians’ jobs badly in the face of rising unemployment. What jobs? House cleaning, doughnut selling, street food vendors, prostitution, barbing, shoe making and their most honourable profession, Teaching. In parenthesis, when things were going fine, these were jobs Nigerians loathe to do which Ghanaians were doing and sending money back to Accra. They left shamefully with the popular “Ghana Must Go” never to come back again!

There are limited options for blacks in South Africa: to leave or die. If the nationals are increasingly insecure with their presence, my candid advice is for them to vacate the country. The role we all played in helping them during the liberation is well appreciated, but now they are saying we have overstayed our welcome. If your host starts to show you the head of the yam, like the Yorubas in Nigerian say, then it is time to take your leave. Leave for them and let’s see what becomes of the country just as Ghanaians left Nigeria and now the difference is clear!

The Nigerian government has recalled the Nigerian Consulate in protest against the attacks. It looks good on the surface but diplomacy has gone beyond just “reciprocity” to “neorealism.” What then happens to Nigerian economic interests in the country? What becomes of the fate of Nigerians in unaffected areas in South Africa? What effect does a mere recalling of the High Commissioner have in the prevailing circumstance?

My unsolicited opinion is that if situations were good back home in Nigeria; if our oil revenues were adequately managed; if jobs were available to our graduates; if the environment were conducive enough for businesses to thrive Nigerians are too big to be classified in the same group with Mozambicans, Zimbabweans, Namibians, or Ugandans in South Africa. While I sympathise with those who lost their properties in the unfortunate incident, that Nigerians can be subject to such degree of humiliation is enough to tell us that we are like lions flocking with sheep!

Ya-Na commiserates with Mahama
18 minutes ago