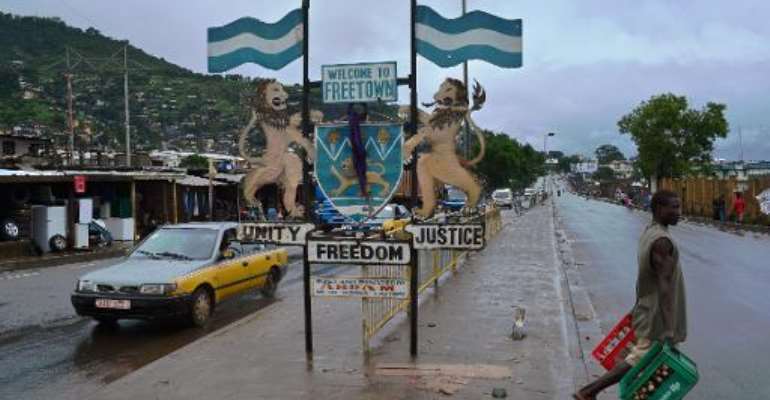 Police in Sierra Leone's capital Freetown are hunting seven people who fled a slum that was placed under quarantine when a member of their family died of Ebola. By Carl de Souza (AFP/File)

Freetown (AFP) - Police in Sierra Leone's capital Freetown are hunting seven people who fled a slum that was placed under quarantine when a member of their family died of Ebola, the government said Wednesday.

Part of the densely-populated Moa Wharf township was sealed off after the youngster, who tested positive for the virus, died on Tuesday, the National Ebola Response Centre (NERC) told reporters.

A group of seven people from the same household, including his mother, are believed to have gone into hiding in Goderich fishing community, around 30 kilometres (20 miles) west of Freetown, the NERC said.

Meanwhile, another six people who had been in contact with the dead youth were transferred to a clinic for observation, NERC spokesman Sidi Tunis said.

Sierra Leone had been making strides in beating the epidemic that has killed almost 11,000 people across west Africa, reporting just a handful of new cases a week since earlier this year.

The Western Area -- the country's most populous district which includes Freetown -- had not recorded new infections for several days before the case in Moa Wharf, which led to several schoolchildren being quarantined just as schools are starting to reopen.

Unsanitary conditions in the shanty town make combatting the spread of Ebola a challenge, officials said.

"Pigs outnumber people in the dirty surroundings, which is a health risk, with many people sharing limited toilet facilities," a health ministry official said.

Sierra Leone's 1.8 million children began to return to school last week, more than eight months after classes were shut to halt the spread of Ebola.

Classrooms had been empty since a state of emergency was announced in July 2014 in response to an outbreak which has killed 10,721 people, according to official figures, almost all of them in Sierra Leone, Liberia and Guinea.

The World Health Organization (WHO) has recorded 3,877 deaths in Sierra Leone, but says the real toll could be significantly higher as many cases go unreported.