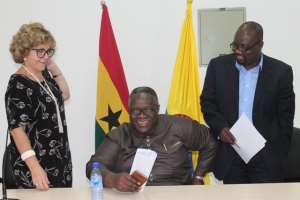 Accra, April 20, GNA - The Second Edition of Spanish Language Course to enhance the capacity of public servants and diplomats to perform effectively in Spanish-speaking countries has opened in Accra.

The six months course is being organised by the Ministry of Foreign Affairs and Regional Integration, the Colombian Embassy in Ghana and the Pontifical Bolivarian University in Medellin, Columbia.

Participants were drawn from seven ministries, departments and agencies, including the Ministry of Foreign Affairs and Regional Integration, The National Youth Employment Authority and the Ghana Immigration Service.

The first edition of the course was organised in 2014 following the signing of a Memorandum of Understanding between the two countries, which was initiated by their respective foreign affairs ministers.

Ms Hannah Serwaa Tetteh, Minister of Foreign Affairs and Regional Integration, in a speech read for her by Mr Leslie Kojo Christian, Chief Director of the Ministry, said language is the bedrock of all societies across the world.

She said the common aspiration to teach and learn Spanish was the surest way to bridge the cultural gap between the people of Ghana and Columbia for their mutual benefit.

She said the participants had the unique responsibility to remain committed throughout the programme to ensure that they fully benefited not only for their career advancement but for the enhancement of the bilateral ties between the two countries.

She lauded the Columbian Government for donating $100,000 to the United Nations Ebola Response Multi-Donor Trust Fund for West Africa.

The Minister also mentioned the Columbia Embassy's collaboration with the Accra Metropolitan Assembly and other stakeholders for the 'Ghana-Columbia: Litre of Light Peace Project,' to promote an alternative lighting system to help improve the economic and social life of beneficiary communities, of which, 1,200 households in four towns in the country have already been identified .

On the educational front, the Minister said the Columbian Government was working with the Institute of African Studies, University of Ghana and the University of Cape Coast in areas of student exchange and research programmes with sister tertiary institutions in Columbia.

Mrs Claudia Torbay Quintero, the Columbian Ambassador to Ghana, said the programme would strengthen the bilateral ties between the two countries.

She said the course offered a wonderful opportunity for the participants to learn the Spanish Language, which could open doors for them on the South American continent.

The Ambassador gave the assurance that the areas of collaboration such as education and energy would be given a further boost.

Mr Eric Odoi-Anim, the Director of Administration of the Ministry of Foreign Affairs and Regional Integration, said the Ministry attached considerable importance to all UN spoken and written languages, including the Spanish Language.

He said a reasonable proficiency in the language by its officers would significantly enhance their work delivery both at home and abroad, while ensuring Ghana's effective engagement not only with their international collaborators, but also in their involvement with international organisations to which Ghana belonged.