A-Poly to establish Centre of Excellence in oil 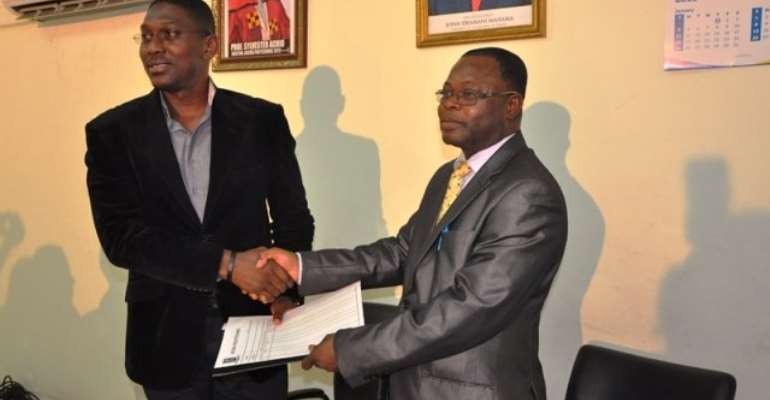 Accra, Feb. 12, GNA - Accra Polytechnic (A-Poly) on Thursday signed a memorandum of understanding (MOU) with solar energy giant, Kinetic Development Company (KDC) for the establishment of Centre of Excellence in Pipe and Pipeline Training in oil and gas.

The Centre, which will train mechanical engineering students interested in oil and gas projects, will provide free training for the first batch of students from A-Poly, after which it will be extended to other students from Ghana and the rest of the West African sub-region.

The project is being executed by A-Poly and KDC in collaboration with the German firm Salzgitter Mannesmann Line Pipe GmbH, producers of oil and gas line pipe, pipe for drinking water and sewage systems, tubes for machinery and plant construction as well as oilfield tubes, pipe for long-distance heating systems and structural tubes.

The collaboration is geared towards the provision of the human resource facet of local content in Ghana's gas and oil industry.

Speaking at the signing of the MOU, Professor Sylvester Achio, the Rector of A-Poly, described the MOU as a great honour for the Polytechnic; since KDC and Salzgitter Mannesmann Line Pipe GmbH had proved over the years to be their dependable partners in project execution.

He said as part of efforts to help address the energy crisis bedeviling the country, A-Poly in collaboration with other international development partners would expand its solar energy capacity, to ensure regular supply of electricity on its campus anytime the national grid was turned off.

The Rector said the Polytechnic would also sink boreholes on campus to help address the issue of erratic water supply, adding that, a biogas production facility would also be set up to convert their waste products into biogas for consumption.

Prof Achio said, A-Poly had put structures in place for a possible take off as a technical university by September, 2016.

Mr Kwame Tufuor, KDC Chief Executive Officer, said under the project, students would be required to go through three months intensive industrial attachment with KDC, both locally and internationally, after which they would be given international certification.

He said the project, which would serve as a channel for technology transfer to Ghana and the entire West Africa sub-region, would train students in areas such as welding, logistics and high frequency induction (HFI).

Mr Kabu Oman - Dean, School of Engineering, A-Poly said the project would serve as a platform for implementing the local content of the oil and gas industry.