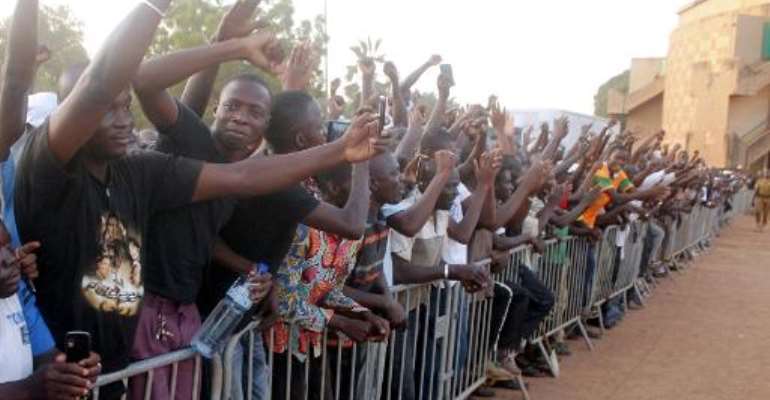 Ouagadougou (AFP) - Veteran diplomat Michel Kafando has been chosen as Burkina Faso's interim president, officials in the west African country announced Monday and will head the country until 2015.

Kafando was selected after several hours of negotiation, which had begun the previous day.

The 72-year-old described the appointment as "more than a honour".

"It is an awesome responsibility that falls to me, I already foresee the pitfalls and the immensity of the task," he told reporters.

Kafando previously served as the country's ambassador to the United Nations from 1998 to 2011. He was also Burkina Faso's foreign affairs minister between 1981 and 1982.

A panel of 23 officials, mainly civilians, chose Kafando after preferring him to the other candidates, which included journalist Cherif Sy and sociologist and ex-minister Josephine Ouedraogo.

"The consensus candidate is Michel Kafando," said Ignace Sandwidi, a representative of the Catholic Church, which was involved in the discussions to find a new leader.

Kafando's appointment will now have to be ratified by the Constitutional Council.

It comes ahead of a deadline imposed by the African Union, which instructed Burkina Faso to establish interim institutions and pick an interim president by Monday or face sanctions.

Elections are scheduled to be held in November next year, returning the country to civilian rule after long-time ruler Blaise Compaore was ousted in October.

Lieutenant Colonel Issac Zida, the army-installed leader, had given the various parties until noon on Sunday to submit names to a panel of 23 mainly civilian electors.

Interviews of the candidates began late on Sunday, despite initial claims by some involved that the winner would be chosen by midnight at the latest.

The army backed Kafando and Ouedraogo.

On Saturday, the military reinstated the constitution, suspended when the army filled the vacuum created by the departure of Compaore, who ruled for 27 years after seizing power in a coup.

A "transition charter" -- a sort of interim constitution hammered out between the military and civilian, opposition and religious figures last week -- was officially signed on Sunday by the military.

Applause erupted after Zida initialled the document which marked his acceptance of a return to civilian leadership in the country.

Under the deal, the president will appoint a prime minister, either a civilian or a military figure, who will head a 25-member transitional government.

According to a draft of the transition blueprint, no members of the interim regime will be allowed to stand in the November 2015 election.

Compaore, who seized power in 1987, quit after violent protests sparked by his bid to extend his rule by changing the constitution of the landlocked former French colony.