Signing of Burkina transition deal pushed back to Sunday 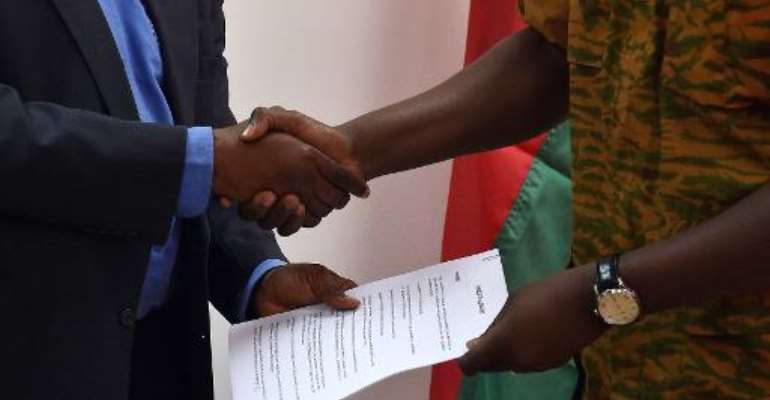 Ouagadougou (AFP) - The signing of Burkina Faso's transitional agreement to return the west African nation to civilian rule has been pushed back by a day for "technical" reasons, a military source said.

The country's army, political parties and civil groups were on Saturday due to sign the agreement, which lays out the steps to a one-year transfer of power from the military, which took over after mass protests forced out veteran president Blaise Compaore on October 31.

But the ceremony has been postponed because the building where the document was to be signed was still being repaired after damage from the demonstrations and because traditional leaders from the regions invited to the ceremony needed more time to travel to the capital, the source said on condition of anonymity.

"The signing of the charter has thus been pushed back to Sunday" at 4:00 pm (1600 GMT), the source said. "We want to brief our traditional leaders on our discussions."

The transition charter, akin to an interim constitution, lays out a one-year transition to civilian rule that includes appointing a temporary president and calls for elections by November 2015.

Delicate negotiations had already begun on Friday in Burkina Faso's capital city Ouagadougou over who the country's next leaders will be, including the president, the head of the interim parliament and the prime minister.

Under the deal, an interim civilian president will be chosen by a special electoral college.

The president will in turn appoint a prime minister, either a civilian or a military figure, who will head a 25-member transitional government.

Opposition parties, civil groups, religious leaders and the military hammered out the transition pact during intense talks and unanimously voted in favour of the roadmap on Thursday.

Compaore quit under pressure amid protests sparked by his bid to extend his 27-year rule by changing the constitution of the landlocked former French colony of some 17 million people.