Nobody will recognise your neutrality so speak up on corruption - Manasseh 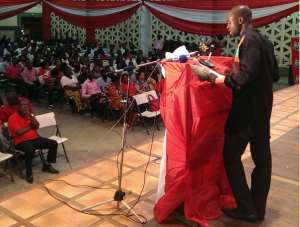 Journalist, Manasseh Azure says keeping quiet over corruption in the country for fear of being tagged politically amounts to actively promoting corruption which has plagued the nation.

He said silence does nothing but only gives the people who perpetuate the act the courage to keep doing what they do, knowing full well that there is no punishment whatsoever for it.

Speaking at a forum organised by Occupy Ghana and IMANI, Mr Azure said “nobody will recognise your neutrality if you decide to keep quiet for fear of being tagged” adding “it is useless to have principles if you're not prepared to suffer for them”.

The award-winning journalist said “we must all learn to suffer for what we believe in and stand for what is good for the advancement of society and live beyond the fear of vilification; for the fear of being tagged some people say they are neutral, but that is an option, deciding not to be corrupt comes with a price”.

He said the many laws against corruption are useless unless they are properly activated and enforced.

He said even though speaking up against the practice of corruption is difficult, the only way to help curb the menace is to be open, ready and willing to name and shame persons found to have perpetrated the act.

Manasseh shared a testimony where a young man mired in one of the corruption scandals said he could not have erection for weeks merely because his name had been mentioned on radio. He said this to make the case whilst there are no prosecutions, exposing corruption alone can achieve a certain positive result.

He accused his colleague journalists of being amongst the most corrupt people in the country saying that they have sold their souls to politicians.

He noted that every politician or public official will want a journalist they can use for their own selfish gains but warned colleague journalists to be wary because “they [politicians] will never respect you."

“We must cease to be like programmed robots, only reporting from press conferences and reechoing what one party says. Let us dignify ourselves and stop contributing to the destruction of the country", he concluded.

He noted that it was encouraging to know that aside the media, several other groups have taken up the fight against corruption and citizens are becoming conscious about the need to fight corruption.

This he says is sending a strong message that corruption has reached an intolerable level and that certain fundamental flaws have thwarted our progress in the fight against corruption.

The attitude of politicising corruption, according to him, only gives corrupt officials the opportunity to find solace in their political parties but that does not help to deal with the situation in any way.

He said the fight against corruption will only be successful if citizens make a conscious effort to unite and not think that voting a particular party out of power will help solve the problem because the fight becomes meaningful only when efforts are sustained beyond one regime.

He appealed to President Mahama to use all the powers available to him to ensure that all persons known to have perpetrated corrupt acts are duly punished for their crimes to serve as a deterrent to others.