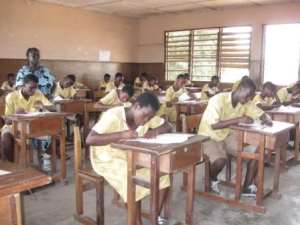 Prof Naana Jane  Opoku-Agyemang
Members of three teachers' associations in the country begin an indefinite nationwide strike today to press home their demand for better conditions of service in what they have described as 'strike within strike.'

Teachers, together with other public and civil service workers, are already on strike over unpaid pension funds. However, the teachers had indicated that today's industrial action is to tell the government that they are not in a mood for any joke.

According to them, even basic materials to work with, such as chalk and notebooks, were not available, making their job extremely difficult—apart from their worsening conditions of service.

'As leaders of teacher unions, we believe we have exhausted all avenues in an attempt to resolve our grievances and yet no cogent solutions seem to have been found. We cannot also sit down for Ghanaian teachers to be used as a subsidy to the national budget, hence the need for “STRIKE WITHIN STRIKE,” Raymond Boakye Darkwa, General Secretary of the Coalition of Concerned Teachers, said in a statement.

The statement also accused the Finance Minister, Seth Terkper, of initiating numerous teacher-unfriendly policies such as stopping of the tax waiver on imported vehicles for teachers and cancelling teacher training allowances.

'It is important to note that for almost three years (i.e. under the watch of Hon Seth Terkper), the Ghana Education Service has never received even up to 20% of its budgetary allocation and this accounts for the lack of chalk, teachers' notebooks and other teaching and learning materials in our schools,' Boakye Darkwa claimed.

The teachers cited non-payment of grants to those who deserve them, incremental credit arrears for 2011 and 2012 had not been paid, no vehicle maintenance allowance, as well as the payment of not more than three months arrears and re-negotiation of the collective agreement as reasons for embarking on the strike.

They said some of their members had worked for a long period of time but were only paid three months salaries, leaving them with several months of unpaid arrears.

According to the aggrieved teachers, they would not call off their strike, even if the labour unions protesting against the non-payment of their pension funds called off the ongoing strike.

Mr Demanya said the teacher unions wrote to the National Labour Commission (NLC) on September 23, 2014 informing it about their intention to undertake an industrial action.

'It took them 16 clear days before they responded to the letter by inviting us to a meeting for a hearing on the issues on Wednesday, October 15, 2014. The unions have had two unsuccessful meetings with the Labour Commission. At these meetings, they were officially served with notices.

According to the teachers, whenever they raised issues about their welfare, the response they got was that the finance ministry was not part of their meetings so they needed approval from the Seth Terpker-led ministry.

'The absence of the representatives from the Ministry of Finance has made it absolutely impossible for the issues to be resolved. The teacher unions see this as a deliberate ploy to thwart the efforts of the Labour Commission to resolve the issues amicably,' he said.

Mr Demanya said, 'Under the present circumstances, the leadership is not in a position to restrain the teachers who have resolved to embark on an industrial action effective Tuesday, October 28, 2014, within an ongoing strike action announced by the Forum.'

Various labour groups in the country embarked on a strike on October 22 to protest the non-payment of their tier two pension funds.

Government has described the action of the labour groups as unlawful and unnecessary.

It has therefore dragged the groups, numbering 12, to court in a bid to seek interpretation of the Pensions Act.

Teachers numbering 5,000 have not been paid their salaries due to 'wanton interference' by the finance minister in the affairs of the Ghana Education Service (GES), Vice President of NAGRAT, Angel Carbonu, told the media.