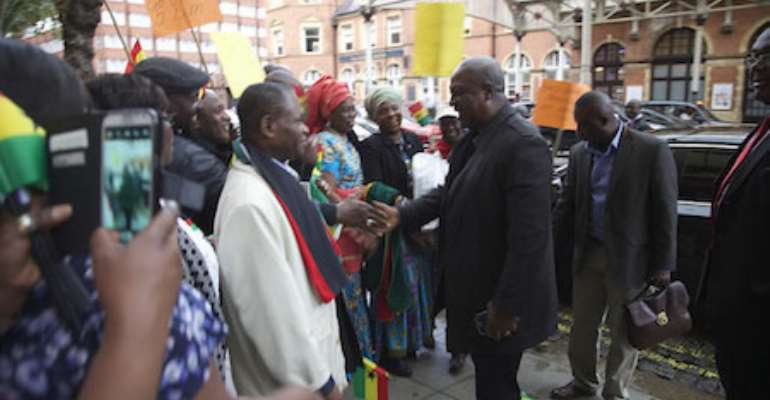 President John Mahama has admitted at a meeting with the UK media that Ghana's weak systems are to blame for the rising spate of corruption in the country.

He said on Sunday efforts by his government to tackle the corruption scourge that has become pervasive in almost every sector of the country is being impeded by "human discretion and interference".

Using the  Ghana Integrated Financial Management Information System (GIFMIS) -- an accounting system that checks public financial  management -- as a case in point the President disclosed that some public officials have been deliberately working to derail its full implementation.

"There are accountants in places who just don't want to hear about GIFMIS. However much you train them, they behave like they still don't understand the system.  That is because GIFMIS will bring transparency into public financial management", he told press men in London.

In the last couple of months, corruption scandals and alleged misappropriation of public funds have hit key government institutions.

This notwithstanding, there are allegations that the palms of the BNI investigators have been greased by top guns at the National Service Secretariat to bury scalding revelations.

Investigations are also ongoing into allegations the Commissioner of CHRAJ, Lauretta Lamptey, misappropriated more than $148,500 of public funds for her accomodation.

President Mahama, however, said these corruption scandals have come about because supervision of government agencies is weak.

According to him his government has been working towards using technology to limit the incidence of weak supervision and enforcement of laws at government agencies.

"The major opportunity to fight and win against corruption is to eliminate the opportunity for people to be corrupt. It's to prevent them from being corrupt. So while we look for people [who have been corrupt] and sanctioning them, we must also look at ways of strengthening the system", he said.

The President has been in London since Sunday to hold a number of meetings at the House of Commons, Chatham House, the Royal African Society and pay a courtesy call on the Queen at the Buckingham Palace.

On his arrival at the UK he was met by Ghanaians living and working there.

As part of the President's itinerary, he will address the All Party Parliamentary Group at the House of Commons on Ebola and Security in the West African Sub-region in addition to hosting investment sessions at the Chatham House and the Royal African Society.

President Mahama will also be in Denmark where he will hold meetings with the Danish Prime Minister, Helle Thorning-Schmidt, and the Crown Prince of Denmark, Prince Federick.

During the two-day official visit to Copenhagen, the Danish capital, the President will deliver the keynote address at the main plenary of the Global Green Growth Forum. Story by Ghana | Myjoyonline.com | George Nyavor | [email protected]