Second US Ebola case as concerns mount over air travel 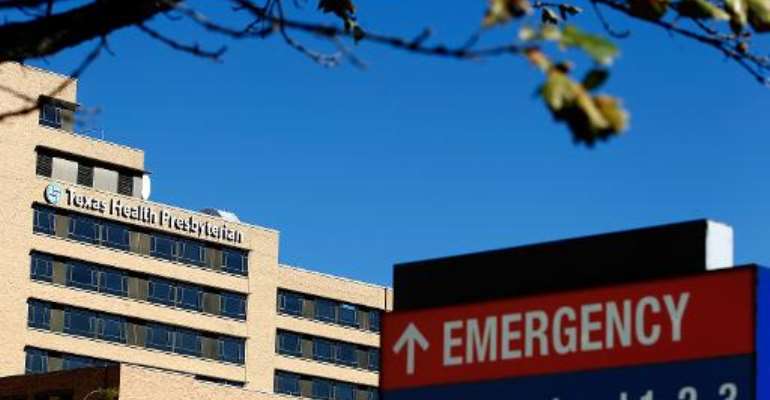 The Texas Health Presbyterian Hospital, where health care worker Nina Pham is being treated for the Ebola virus, is seen on October 14, 2014 in Dallas, Texas. By Mike Stone (Getty/AFP/File)

Washington (AFP) - A second health care worker in Texas tested positive for Ebola, US officials said Wednesday, as concerns mounted worldwide over the possibility that airplane travelers could be exposed to the virus.

US President Barack Obama canceled a campaign trip to the US Northeast, instead convening a meeting of his Ebola response team at the White House.

Earlier, he had been due to hold a videoconference with leaders from Britain, France, Germany and Italy to discuss the latest on the epidemic, which has spilled into the United States and Europe and sparked panic across the globe.

The hemorrhagic virus has killed more than 4,400 people in West Africa since the start of the year, and the UN health agency has warned of the potential for a steep rise in infections in the coming months.

Airports in Britain, Canada and the United States have introduced stepped-up screening of travelers arriving from West Africa, where the disease has ravaged Liberia, Sierra Leone and Guinea.

But the European Union stopped short of recommending full continent-wide screening, suggesting instead that member states give medical information at airports to travelers from Ebola-hit countries.

Meanwhile, the US Centers for Disease Control and Prevention (CDC) issued an alert for all passengers who traveled on an October 13 flight from Cleveland, Ohio to Texas, seeking to interview 132 people who flew on a plane with an Ebola-infected health care worker who had not yet become symptomatic.

The woman was isolated at Texas Health Presbyterian hospital in Dallas late Tuesday with a fever, and the crew on the flight said she had not been symptomatic when she flew a day earlier.

Ebola is only transmitted by close contact with the bodily fluids of an infected person who is showing symptoms such as fever, diarrhea or vomiting.

"Individuals who are determined to be at any potential risk will be actively monitored," the CDC said.

The second person infected with Ebola on US soil was, like the first, a hospital caregiver for a Liberian Ebola patient, Thomas Eric Duncan, who died in Dallas on October 8.

The first such case was announced Sunday, that of 26-year-old nurse Nina Pham, who is currently in good condition in hospital.

"It may get worse before it gets better, but it will get better," Dallas Mayor Mike Rawlings told a press conference.

The worst Ebola outbreak on record has so far claimed 4,447 lives, out of 8,914 recorded cases since the start of the year, most of them in Liberia, Sierra Leone and Guinea.

"Ebola got a head start on us," Anthony Banbury, head of the UN Mission for Ebola Emergency Response, told the United Nations Security Council by remote link from Ghana Tuesday.

"It is far ahead of us, it is running faster than us, and it is winning the race," he said. "We either stop Ebola now or we face an entirely unprecedented situation for which we do not have a plan."

The World Health Organization also warned that the infection rate could reach 10,000 a week in a worst-case scenario by the first week of December.

Ninety-five Liberian health workers have died so far in the epidemic and their colleagues were seeking compensation for the risk of dealing with Ebola, which spreads through contact with bodily fluids and for which there is no vaccine or widely available treatment.

In the capital Monrovia, a hospital patient described scenes of desolation on local radio, with sick people climbing over a fence to escape after being deserted by striking staffers.

"One of our colleagues died because he was bitten by a patient," said Alphonso Wesseh, a health worker who joined the strike.

"We are in a hellish situation."

Liberia's presidency said that the United States was set to give the country $5 million to pay health care workers.

CDC director Thomas Frieden said this week that a "breach in protocol" led to Pham's infection.

US nurses have complained they were given little guidance on how to handle an Ebola case.

In Spain, 44-year-old nurse Teresa Romero -- thought to have caught Ebola while treating an elderly missionary infected in Sierra Leone -- was said to be in stable condition.

In Germany, however, a 56-year-old Sudanese doctor who had worked as a UN volunteer in Liberia died of Ebola late Monday.