Malala in Nigeria for abducted girls, meets escapees and parents 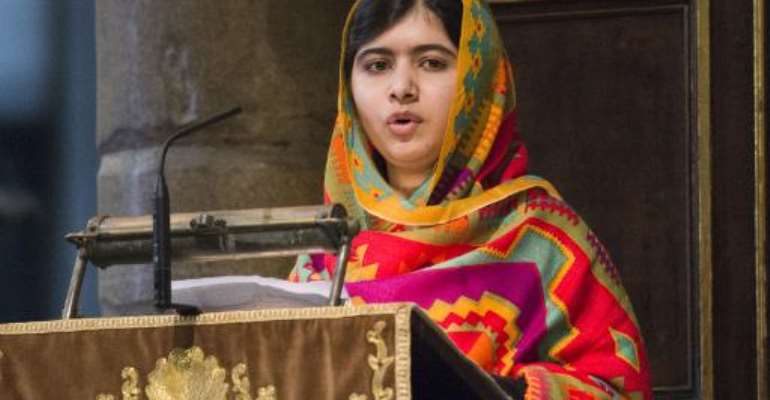 Abuja (AFP) - Pakistani schoogirl Malala Yousafzai, who survived being shot in the head by the Taliban, held meetings Sunday in the Nigerian capital Abuja with some parents of the over 200 girls abducted in northern Nigeria and leaders of a group campaigning for their release.

She is scheduled to meet President Goodluck Jonathan on Monday in the Nigeria capital, exactly three months after 276 girls were abducted by Boko Haram Islamists from their school in Chibok, in northeast Borno state, a member of her entourage told AFP.

The Pakistani activist fighting for girls' education rights met separately with leaders of the BringBackOurGirls campaign group and some 15 parents of the abducted girls, along with five of the girls who escaped from their abductors.

"The situation at Chibok is the same with the situation in Swat where some extremists stopped more than 400 girls from going to school," Malala told the escapees after listening to their stories.

Swat is her birthplace in Pakistan where she was shot in the head in 2012 on her wa‎y from school.

"And I believe your voices are more powerful than any other weapon. So believe in yourself and go and continue your journey. Continue learning and you will succeed because we did succeed in our journey. There is peace in Swat. Every girl is going to school.

"The same way, we will be here one day we will see all of you going to school, getting your education," she added.

The Nigerian government has been under intense international pressure since the abduction of 276 girls on April 14.

Fifty-seven of the girls escaped within days of the night-time raid on the school in Borno state. Local officials have said that 219 are still being held.

"She (Malala) has an appointment to meet President Goodluck Jonathan 11 am (1000 GMT) tomorrow," her aide told an AFP correspondent after the meetings.

Malala urged the Nigerian government to take the girls' plight seriously for the sake of the country's future.

"If you don't focus on the future generation it means you are destroying your country. Think about these girls."

She urged Nigerian authorities to ensure the safe release of the remaining girls being held hostage by the Islamists.

Parents and local leaders have accused the military of doing almost nothing to secure the release of the hostages.