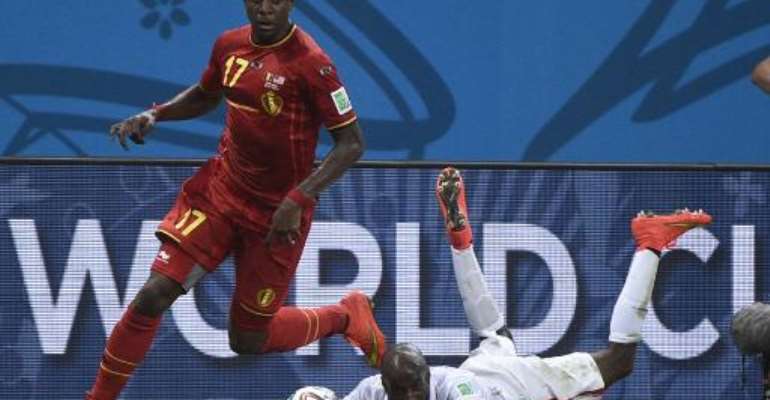 Belgium's forward Divock Origi (left) vies with US defender DaMarcus Beasley during a round of 16 match at Fonte Nova Arena in Salvador during the 2014 FIFA World Cup on July 1, 2014. By Martin Bureau (AFP/File)

"We are very proud as a family, he has gone a notch higher than all of us," Origi's uncle Austin Oduor, a Kenyan civil servant and former captain of the Kenyan national team, told AFP.

"He has proved his credentials as a player, not just in scoring, but has shown he is able to play a big role in the team," Odour added.

Teenager Origi scored the only goal after coming on as a substitute in Belgium's first round win over Russia to fire Belgium into the last 16.

They went on to beat the United States 2-1 to set up Saturday's quarter-final with Argentina.

Against the USA, the 19-year-old Origi had been brought into the side at Romelu Lukaku's expense after impressing as a substitute in all three of Belgium's Group H wins and he was denied within the opening minute by Howard's outstretched leg after racing onto Kevin de Bruyne's through ball.

"He has propelled Belgium to do well to reach the quarter-finals. He has proved to be an asset and has become an important part to Belgium's progress," said Oduor.

Many in Kenya might otherwise have cheered for Argentina, popular here for iconic players like Diego Maradona.

But the Kenyan connection has boosted support for the Belgian team. Origi was himself once possibly touted for a call-up into the Kenyan national team, the Harambee Stars.

Oduor was also a member of the Gor Mahia team which won the now-defunct African Cup Winners Cup in 1987.

"He is being celebrated as the first player of Kenyan origin of to score at a World Cup," Kenya's Daily Nation wrote this week, praising his ability to "poach from inside, strike the ball from afar and is a willing runner."

His uncle -- whose son Arnold Origi is goalkeeper for Norway topflight club Lillestrom -- believes the youngster made a wise decision to play for Belgium instead of Kenya.

"The atmosphere he's operating in is conducive for him, he wouldn't have found it anywhere else," Odour added.

"The Belgium team has given him space to operate and he has exploited it to the full.

"As such he has even silenced his critics who were thinking he would only sit on the bench during the World Cup. There is a lot at stake for him."