IT’S FIVE IN ONE: China’s five principles of peaceful co-existence and how that can shape Africa 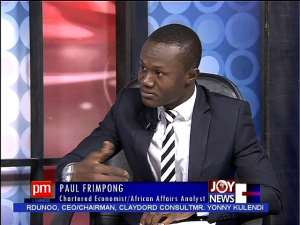 Perhaps it is time that we as Africans begin to question the very things we have been doing for decades, yet getting the same results which are totally different from our collective aspirations; aspirations of economic prosperity for all, aspirations of political stability for all; a continent devoid of reckless diseases; a continent where people would have the confidence to believe that they can realize their dreams and therefore do not have to seek for rosy platforms in the outside world. Or perhaps, a continent where people who do not even have dreams and aspirations, could automatically, by the virtue of the fact that they happen to be sons and daughters of this rich continent, be inspired by the things happening around to begin to have one and move on to realize them.

Yet, we could learn from the rapid economic development of the East Asian Economies, specifically China.

To some of us, it is no surprising because the steady rise of China in the global economy (economic and political) is, but hinged on what is documented as the 'Five Principles of Peaceful Coexistence'. Interestingly, the various Pan-African institutions established on the continent after decades upon decades, have consistently failed to meet even half of its set objectives. Yet China, a country with over 1 billion people have been able to institutionalize these principles to become a guiding principle to transform their economy and as well establish their presence in the global economy.

June 28 this year marks the 60th anniversary of the introduction of this 'Five Principles of Peaceful Coexistence which are mutual respect for sovereignty and territorial integrity, mutual non-aggression, non-interference in each other's internal affairs, equality and mutual benefit and peaceful coexistence. This is a five in one principle.

Five in one
These five principles introduced into the Chinese system a new paradigm; one which is infused with Chinese characteristics which have become the guideline in China's international relations and diplomacy. It is that which caused China to become even more relevant in the global political economy. It has helped China to establish enviable relations with over 160 countries across the world without much difficulty. A case in point to be learned by Pan-African institutions to strengthen the tides between the 54 fragmented countries across the continent.

Just like the Organization of African Unity now the African Union in 1963, committed to certain principles of pan-Africanism to liberate Africa from political rule first of all and subsequently from economic rule, also in 1954, China and India, the two giants in Asia established diplomatic relations.

In June 1954, former Chinese Premier Zhou Enlai visited India and Myanmar at the invitation of the two countries and held talks with his then Indian and Myanmese counterparts, Jawaharlal Nehru and U Nu.

Consequently, in the 'Joint Declaration of Chinese and Indian Premiers' issued on June 18 and the 'Joint Declaration of Chinese and Myanmese Premiers' issued on the following day, the 'Five Principles of Peaceful Co-existence were officially announced as the basic norms guiding the Sino-Indian and Sino-Myanmese relations. It became China's fundamental and everlasting norms guiding international relations.

In the following 60 years, the Five Principles of Peaceful Co-existence withstood the vicissitudes in the international arena and has been embraced by more and more countries across Asia. They have become basic norms guiding international relations and has played and continues to play an important role in safeguarding world peace and development.

A careful economic and political structures, concepts and soft ideologies, which have contributed to the rise of China could revealed as lessons that Africa could learn from in order to achieve the African dream, (if any)obviously that which was envisioned by Dr. Kwame Nkrumah of Ghana, Mwalimu Julius Nyerere of Tanzania, Sam Nujoma of Namibia; Patrice Lumumba of the Democratic Republic of Congo etc. for a united Africa of prosperity, where the people will know no poverty. The Pan-African dream of a fully developed Africa, not just in few countries, but in all countries across the continent. This shared dream of a united Africa, politically, economically, culturally etc. which is still resonated with us and projected by the African Union and other regional bodies.

The Five Principles established 60 years ago still resonate very well with the Chinese dreams which is set to be rejuvenated to the next level, a level I think would help China to become the largest economy in the world.

China and Africa
The China-Africa relation started dating back into the 1960s and 1970s. But really, the relation came to the fore in 2006 when 48 African leaders attended a joint forum in Beijing. The Forum on China - Africa Cooperation is the name of the meeting between the People's Republic of China and the states of Africa. There have been five summits held to date, with the most recent meeting having occurred from July 19 - 20, 2012 in Beijing, China. Not forgetting the BRICS initiative led obviously by China.

In 1980, the total Sino-African trade volume was US$1 billion. In 1999, it was US$6.5 billion and in 2000, US$10 billion. By 2005, the total Sino-Africa trade had reached US$39.7 billion before it jumped to US$55 billion in 2006, making China the second largest trading partner of Africa after the United States which had trade worth US$91 billion with African nations. In 2010, trade between Africa and China was worth 114 billion and in 2011, US$166.3 billion. In the first 10 months of 2012 it was US$163.9 billion. Currently, there are an estimated 800 Chinese corporations doing business in Africa, most of which are private companies investing in the infrastructure, energy and banking sectors. Chinese aid, trade and investment in Africa have increased dramatically since the early 1990s.

At the level of attitude, China sees its interest in development as directly linked with Africa. Of course, that is what has necessitated for the constant engagement between African countries and China in the last decade.

China's expansive engagement has raised hopes across Africa that China will turn its attention to long-neglected areas such as infrastructure and that its strategic approach will raise Africa's global status, intensify political and market competition, create promising new choices in external partnerships, strengthen African capacities to combat malaria and HIV/AIDS and promote economic growth. It also raises nettlesome policy issues and complex implementation challenges that China will increasingly confront in the future

Africa's target
On the African continent, we seek for peace and security, political stability and economic development. These have always been our target all these years, yet we have consistently missed on these targets. Yet under the first principle, China adheres to culture of mutual respect for sovereignty and territorial integrity of member countries in Asia. They have consistently pursued a neighborhood policy of building amity and friendship, and firm in their resolve to uphold China's territorial sovereignty. They interestingly believe in repaying kindness with kindness and meeting wrong doings with justice.

Running through the Five Principle of Peaceful co-existence, commitment from China to strengthen cooperation with Africa in multilateral systems and to appeal to the international community to pay more attention to questions concerning peace and development in Africa is seen. This is also reflected in what is referred to as strengthened exchange and cooperation in various social fields and support for African countries to enhance capacity building and cooperation to achieve sustainable development.

Regional turbulence courts disaster while stability in the neighborhood brings prosperity. Africa therefore owes its progress to a peaceful and stable regional environment, and peace and stability are fundamental safeguards for economic development and transformation.

Give your members identification – IGP tells Courier Associa...
12 minutes ago