Chinese Saloon Loan: Is it true that ... 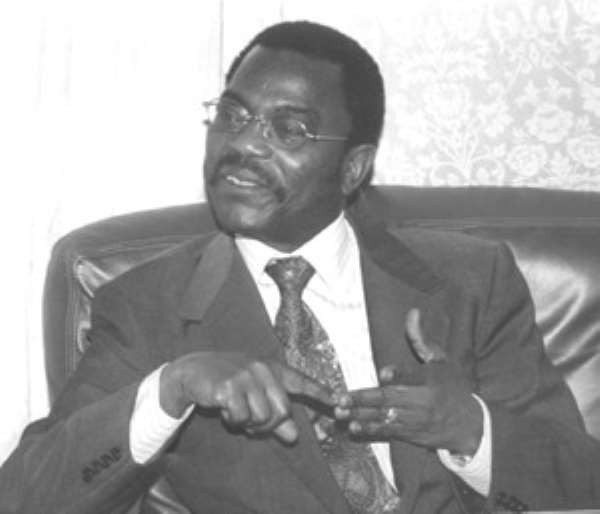 The Governor of the Bank of Ghana, Dr. Paul Acquah, was neither consulted nor was he involved in the negotiations that led to the signing of the Memorandum of Understanding (MOU) of 12th November 2003 between the China New Techniques (CNT) Group (Holdings) Ltd. and the Minister of Finance Yaw Osafo-Maafo and the Minister of Trade, Industries and Presidential Special Initiatives Alan Kyeremateng, in which the latter two agreed that in the matter of the US$300 million loan, the Bank of Ghana would issue a Guarantee in favour of the CNT Construction and Investment (CNTCI) to the effect that:

"CNT shall receive a Letter of Intent from the Bank of Ghana, specifying its ability and preparedness to issue a guarantee in favour of CNT Construction Investment Ltd. up to the initial amount referred to in paragraph 1",

"--the Bank shall support the general economic policy of the Government and promote economic growth and effective and efficientt operation of banking and credit systems in the country, independent of instructions from the Government or any other authority"

and that to the extent that the MOU was intended to be binding on the Governor, it amounted to a breach of section 3(1) of Act 612? Subsequent to the signing of the Government of Ghana (GOG)/CNT MOU of 12th November 2003 referred to above, the Governor of the Bank of Ghana, Dr. Paul Acquah, has caused to be issued the Bank of Ghana Guarantee required to be issued under pressure from Finance Minister Yaw Osafo-Maafo and over and above the objections of the Governor, and that there is a conspiracy to keep the issuance of the Guarantee a secret from the IMF and the World Bank as well as from Parliament, the Ghanaian media, and the people of Ghana as a whole? Very bad blood developed between the Honourable Mike Gizo, MP for Shai-Osudoku, who also used to double as the Chief of Protocol of the Action Church, and the Archbishop of the Church, the Right Reverend Archbishop Duncan-Williams, on the day of the elevation of the latter to the Archbishopric, over protocol acknowledgements for the MP and what the Honourable MP for Shai-Osudoku considered to be a diminution of his status in relation to other Honourable MPs and invited guests such as the Honourable Kwamena Bartels, Minister for Private Sector Development, the Honourable Jake Obetsebi-Lamptey, Minister for Tourism and Modernisation of the Capital, and the Honourable Kenneth Dzirasa, Second Deputy Speaker, who were all placed on special seats reserved for dignitaries, so much so that the Honourable Mike Gizo walked out on the Archbishop and on the Church, to the extent that with the exception of the 31st December 2003 night church service, Honourable Mike Gizo has ceased to attend any church service in the Action Church, and as for his wife Doreen, who went on air and went berserk in a most traitorous manner, berating the NDC whose largesse she enjoyed whilst her husband was in office, saying how she now enjoyed freedom under the NPP and how her husband Mike Gizo had now found his "balls" which he lost during the time he was an NDC Minister, she has stopped going to the Action Church altogether ever since the row broke out between her husband and Archbishop Duncan-Williams? The NPP Government has started withdrawing the "political road" contracts it has awarded all over the country to its members, supporters and sympathisers, including the contracts for the construction of drains and culverts, because:

(i) Budget over-runs are already causing the Government to do what it has undertaken with the IMF not to do, that is, engage in over-expenditure in an election year;

(ii) The IMF and the World Bank have warned the Government that they "will pull the plug" on their agreed programme with them if the over-expenditure does not cease immediately;

(iii) Non-performance, shoddy work and disgraceful execution of the projects are betraying the political nature of the contracts and exposing the NPP to public ridicule and embarrassment? The two stories in the 'Statesman' and the 'National Guardian' of last week that sought to create the impression that former NDC Minister of Finance Dr. Kwesi Botchwey had deepened the agonies of NDC flagbearer Professor John Evans Atta-Mills by criticising the latter's management of the economy as Chairman of the Economic Management Team of the Rawlings administration were actually based on a 1994 presentation of Dr. Botchwey to his colleague Ministers at a time when he (Dr. Botchwey) was the Minister of Finance and Professor Mills was not even a member of the NDC Government and was meant as an internal self-criticism of the performance of himself and his colleagues at the time, and is it true that the strategy has boomeranged in the faces of the NPP spin doctors who evolved it and rather accelerated the rapprochement between Dr. Botchwey and Professor Mills, resulting in the now famous "Apam Reunion" of the two intellectual giants which saw the two former classmates at the University of Ghana Law Faculty embracing and hugging each other, such that a blame-game has now erupted within the NPP as to who could have been responsible for such a gargantuan political miscalculation?