WHY FUEL SUBSIDIES SHOULD NOT BE ABOLISHED. 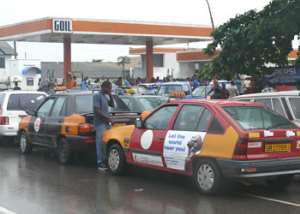 Inasmuch as I support a healthy debate on whether subsidies on fuels be scraped completely or not , I equally think our energies be rather channeled to the debate of how to rather find a way to make subsidies be enjoyed by it target group than what we are seeing today .

It is for a reason that fuel price subsidy was introduced because there exist different class of people base on financial strengths and also to discourage the use of charcoal as cooking fuel subsidy was paid on LPG by government.

Why don't they rather find a way to let the subsidies get to we those it was meant for rather than abolishing it at the detriment of the very poor in society?

I still can't decipher why a country with close to 26million population cannot find a solution to making only those that the subsidy was meant for enjoy them but rather find a lazy solution of scraping it completely at the detriment of the very poor in society.

In the year 2011 at the Engineering Auditorium of KNUST, I can't tell if we only went to waste hours continuously for 5 days all in the name of a the very first colloquium on OIL &GAS in Ghana of which I was constantly seated in front to listen and learn from renowned economist like Kwame Mpiani and a host of oil and gas experts across the world.

One issue that popped up was that the subsidies on LPG targeted at domestic uses of the fuel was rather being enjoyed by commercial uses with commercial cars forming the majority but after series of presentations on the way forward in curbing this menace, an antidote was found which is simple and laudable.

THE SOLUTION
Upon several slides, analysis and statistics, One of the presenters, a lecturer at the college engineering of KNUST suggested that commercial vehicles using LPG as fuel be given special stickers that will be renewed quarterly at a fee at the DVLA since they cannot be made to pay more at the point of sales. This fee will make commercial uses pay more whilst the domestic user enjoys the subsidy.Same can be done to the other fuels. Special stickers for SUVs, saloon and trotro. I suggest those in charge request for the papers of that colloquium and understudy it because it will be of help