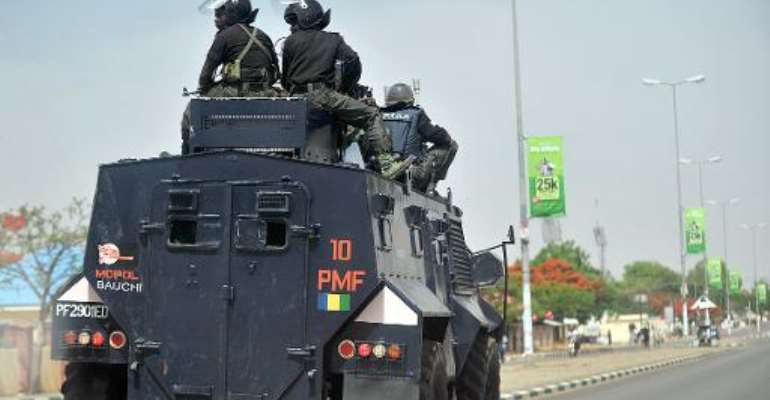 File photo of Nigerian police on patrol in the capital of Bauchi state, where a bomb blast at a bus station killed five people on October 23, 2014. By Tony Karumba (AFP/File)

Kano (Nigeria) (AFP) - A bomb blast at a bus station in a north Nigeria area previously targeted by Boko Haram killed five people, police said Thursday, in what appeared to be the latest crack in the government's purported ceasefire with the Islamists.

Police in Bauchi state confirmed overnight witness reports of a huge explosion at the terminal in the town of Azare at 9:45 pm (2045 GMT).

"The whole place was a mess," he told AFP after visiting the site late Wednesday.

Bauchi police spokesman Mohammed Haruna said the bomb killed five people, leaving them "burnt beyond recognition," and that 12 others were injured.

Several witnesses said they believed the bomb had been embedded in a parked car and was detonated remotely, but police did not give details on the nature of the explosive device.

While there was no immediate claim of responsibility, Bauchi has been one of the hardest hit areas in Boko Haram's five-year uprising against the Nigerian state.

Bus station bombings have also become something of a hallmark for the insurgent group after twin attacks at a terminal on the outskirts of the capital Abuja earlier this year killed nearly 100 people.

The station in Azare, a town roughly 200 kilometres (125 miles) from the state capital Bauchi city, is a widely used transit point by travellers coming from Nigeria's embattled northeast, which has been under a state of emergency since May of last year.

Babale said locals were fortunate the blast went off later at night, as the Azare station is packed with commuters earlier in the evening and the toll could have been much higher.

Azare saw a series of attacks blamed on Boko Haram through 2012, while Bauchi has been consistently targeted throughout the uprising, including through church bombings, coordinated gun raids and notably a massive prison raid in 2011.

Any indication that the latest explosion was tied to Boko Haram will further undermine the government's claim to have negotiated a ceasefire with the extremist group.

The surprise deal was announced by the presidency and military on Friday but there are already strong signs that the pact was hollow.

Violence raged through the weekend in the northeast and the credibility of the so-called Boko Haram negotiator has been widely questioned.

A top aide to President Goodluck Jonathan also said the Islamists had agreed to release the 219 schoolgirls held hostage since their April 14 abduction in the northeast town of Chibok.

Like with the ceasefire, there has so far been no sign that the hostage release deal is legitimate.

Nigerian negotiators were reportedly set to resume talks with Boko Haram envoys in neighbouring Chad next week, but further questions will likely be asked about the identities of the so-called rebel negotiators.

Boko Haram, which wants to create an Islamic state in mainly Muslim northern Nigeria, is a fractured group with an unclear command structure.

Analysts doubt that the individuals in talks with Nigeria have the influence to enforce a blanket ceasefire.