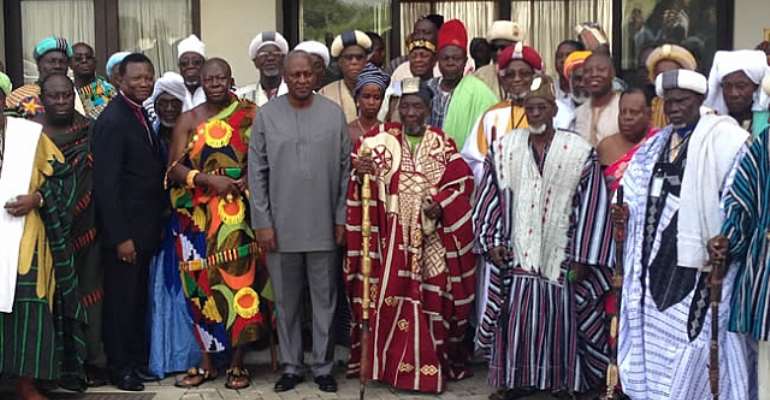 Konkombas and Bimobas in Nakpanduri have resolved to end their three decade-long protracted land dispute and leave peacefully to facilitate the development of the area.

At a unification durbar at the palace of the  Nayiri, the overlord of the Mamprugu traditional area,  Naa Bohagu Mahami Abdulai Sheriga in Nalerigu in the East Mamprusi District of the Northern Region, chiefs and the youth from the two feuding ethnic groups chewed a ritual cola nut from the Nayiri to seal their unity and peaceful coexistence.

Disagreement between the two ethnic groups in the area over the years have claimed several lives and destroyed properties worth thousands of Ghana cedi.

With the ritual cola nut performed, the Bimobas in Nakpanduri have agreed to welcome back the Konkombas to resettle at Kpemale after they fled the community to neighboring areas following the conflict.

Over 20 divisional and paramount chiefs from the Mamprugu Traditional Kingdom made up of the Konkombas, Mamprusis and Bimobas attended the historic ceremony which was witnessed by Members of the Northern Regional Security Council led by the Regional Minister Alhaji Mohammed Muniru Limuna, Members of Parliament from the area and the personnel from the West Africa Network for peace Building among others.

A colorful display of the rich culture of the two ethnic groups was displayed as the two feuding chiefs joined the youth to dance to the throbbing beats of the gongon to demonstrate their commitment to coexist peacefully.

Both the Konkombas and Bimobas chiefs in Nakpanduri described the conflict that engulfed the area as the work of the devil and recounted how the conflict had created so much distress in the area. They therefore do not hope to see that again in their lives.

Naa David Kansuuk Chief of Nakpanduri who read a speech on behalf of the Bimobas said “the conflict has made them lose lives and properties and each one of them have learned lessons and the effects of conflict”.

Naa Nasimong chief of the Konkombas said the day should mark an end to conflict of destruction in the area.

“Now that a lot of human lives and properties have been lost, today should mark an end to it and we shouldn't go and fight again.”

Northern Regional Minister, Alhaji Mohammed Muniru Limuna, who played a vital role in leading the regional Security Council and WANEP to mediate between the factions, expressed contentment at the decision taken by traditional leaders in the area.

He reminded them to be mindful of people who may return to incite them to satisfy their personal interest.

“I know there are a lot of people here who are not happy that we have this peace. They are not happy because they will no more get cattle to steal and go and sell at neighboring countries when they are fighting and the people run away. We are also aware that people want you to fight and they will go and buy arms and make money. Please let's work together to keep the peace and shame them.”

The Nayiri thank WANEP the Northern Regional Security Council and the Catholic Church in the area for their role in resolving the dispute between the two ethnic groups under his kingdom.